Are Remarks That Work & Motherhood Are Incompatible Evidence Of Gender Discrimination? 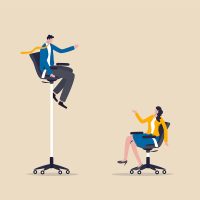 In that case, a woman named Dingman brought a gender discrimination lawsuit against her former employer, Fuji Japanese Steakhouse Sushi, Inc. (Fuji), pursuant to Title VII of the Civil Rights Act of 1964 (Title VII). Under Title VII, employers are prohibited from discriminating against employees on the basis of gender. Dingman claims that Fuji violated Title VII by failing to promote her to the position of General Manager because of her gender.

Soon after learning of the promotion, Mattiello asked Chen why Dingman was passed over for promotion, and Chen said, “her brain is scrambled from having the baby.” Dingman also confronted Chen about not getting the General Manager position. Chen responded that Dingman was acting crazy and it was because of the baby. On August 14, 2019, a co-worker texted Dingman that Chen “said you have baby you have no time no more.” That same day, Dingman notified Chem that she was leaving her job at Fuji.

Fuji filed a motion with the trial court seeking dismissal of Dingman’s gender discrimination claim. In moving for dismissal, Fuji argued that Chen’s alleged comments that Dingman’s newborn baby had “scrambled” her brain and that Dingman would not have time for a role as General Manager were not gender-based stereotyped remarks but, instead, were based on “familial status,” which is not protected by Title VII. In other words, Fuji claimed that any discrimination Dingman experienced was based on “familial status” and Title VII does not prohibit discrimination based on “familial status.” The trial court denied Fuji’s motion for dismissal and ruled that Dingman was allowed to proceed to a jury trial on the issue of whether she was denied promotion because of her gender in violation of Title VII.

In denying Fuji’s motion for dismissal, the trial court determined that Chen’s alleged comments that Dingman’s newborn baby had “scrambled” her brain and that Dingman would not have time for a role as General Manager were gender-based stereotyped remarks. The trial court explained that “notions that mothers are insufficiently devoted to work, and that work and motherhood are incompatible, are properly considered to be, themselves, gender-based.” The trial court further determined that Chen’s comments “provide[ ] a strong showing that discriminatory motive factored into the adverse employment decision, and a reasonable fact finder could find that sex-stereotyping played a role in the employment decision.” Thus, the trial court concluded it was for a jury to decide whether Dingman was passed over for promotion because of her gender in violation of Title VII.