Are Women Protected Against Pregnancy Discrimination While On Maternity Leave? 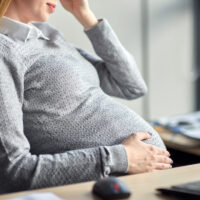 In that case, Lori Shafrir (Shafrir) brought an employment discrimination lawsuit against her former employer, Association of Reform Zionists of America (AZRA), pursuant to the PDA. Shafrir alleges that AZRA violated the PDA by firing her on the basis of her pregnancy.

In May 1993, Shafrir began working for AZRA as an Assistant Director. In June 1994, Shafrir notified AZRA that she was pregnant and expected to deliver in January 1994. In October or November 1994, Shafrir discussed her maternity leave with AZRA’s Executive Director, a man named Hirsch. According to Shafrir, Hirsch agreed that she could return to work from maternity leave on May 1, 1995.

Fired While On Maternity Leave

Shafrir claims that before her maternity leave began, Hirsch made numerous comments reflecting sex-based and pregnancy-based discriminatory animus. Shafrir testified that Hirsch remarked “everyone is always pregnant” and “how come we can’t have a man around here for a change?” On another occasion, according to Shafrir, Hirsch stated that a “woman doesn’t need the entire six weeks of maternity leave . . . [and] she shouldn’t take it.” Later, Hirsch allegedly asked Shafrir, “what is it with you—there’s either miscarriages, D & C’s, or pregnancies.”

In further support of its motion for dismissal, AZRA argued that the evidence established that Shafrir was terminated because she refused to return to work on April 3, 1995 as instructed by Hirsch and not on the basis of her pregnancy. In rejecting this argument, the trial court found that Shafrir had come forward with sufficient evidence to establish that her pregnancy was the real reason for her termination. This evidence, the trial court determined, included the termination of Shafrir while she was on maternity leave, Hirsch’s sex-based and pregnancy-based derogatory remarks, and AZRA’s replacement of Shafrir with a woman who was not pregnant. From this evidence, the trial court concluded, a reasonable jury could find that Shafrir was terminated on the basis of her pregnancy in violation of the PDA.