Can An Employee Have A Sexual Harassment Claim When Other Employees Receive Job Benefits For Granting Sexual Favors? 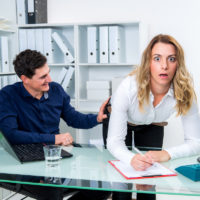 The decision by the U.S. District Court for Delaware in Toscano v. Nimmo, 570 F.Supp. 1197 (D. Del. 1983) is instructive in showing how a message is implicitly conveyed that sexual favors are demanded as a quid pro quo in return for job benefits. In that case, Margaret Toscano (Toscano) brought an employment discrimination lawsuit against the Veterans Administration (VA) pursuant to Title VII. Toscano claimed that she was denied promotion based on the fact that the granting of sexual favors was a condition for promotion.

In support of her sexual favoritism theory, Toscano alleged that Segovia frequently made sexual remarks and sexual advances towards women under his supervision. The sexual advances included making telephone calls to sexually proposition several female employees at home and making telephone calls to female employees at work to describe his sexual encounters with women under his supervision. Segovia’s workplace sexual behavior included having a sexual relationship with Nelson. On one occasion while at work, Segovia told Toscano about a sexual encounter that he had with Nelson and told Toscano that he was going to give Nelson the WAS position because she was “very good in making him feel good” and “she’s a real professional at it.” While their sexual relationship was taking place, Segovia selected Nelson for the WAS position.

Supervisor Demanded Sex As A Condition For Promotion

The VA moved for dismissal of Toscano’s quid pro quo sexual harassment claim. In doing so, the VA claimed that Toscano was not credible because she was a “woman scorned.” According to the VA, Toscano had a sexual relationship with Segovia and expected to marry him. After Segovia “jilted” her, Toscano only brought the Title VII lawsuit as “revenge.” In denying the VA’s motion for dismissal, the trial court concluded that the purported sexual relationship between Toscano and Segovia “never in fact occurred.”

In denying the VA’s motion for dismissal, the trial court further found that “the granting of sexual favors was a condition” for receiving promotion to the WAS position. In support of its finding, the trial court pointed to evidence regarding Segovia’s sexual advances towards other women, his descriptions of his sexual encounters with other women under his supervision, his sexual relationship with Nelson, and his remark that Nelson was going to get the job because she was “very good at making him feel good.” From this evidence, the trial court concluded, “[f]or Segovia to have selected someone for the position based on the receipt of sexual favors would have been entirely consistent with this pattern of conduct.”

Based in Ocala, Florida and representing employees throughout Central Florida, we have almost twenty years of experience representing victims of sexual harassment. If you have been sexually harassed at work or have questions about sexual favoritism in the workplace, please contact our office for a free consultation with our Alachua County, Florida sexual harassment attorneys. Our employee rights law firm takes sexual harassment cases on a contingency fee basis. This means that there are no attorney’s fees incurred unless there is a recovery and our attorney’s fees come solely from the monetary award that you recover.