Can Older Workers Terminated In A Reduction In Force Still Prove Age Discrimination? 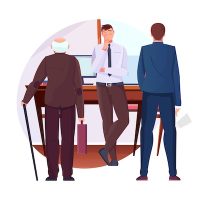 In that case, a man named Shields brought an age discrimination claim against his former employer, SMC Corporation of America (SMC), pursuant to the Age Discrimination In Employment Act (ADEA). Under the ADEA, employers are forbidden from discriminating against employees because of age. Shields claims that SMC violated the ADEA by terminating his employment because of his age.

SMC manufactures pneumatic and instrumentation components, which are used in factory automation. SMC maintains a sales force that sells SMC’s components to customers for use in customers’ own factories. In January 2005, Shields began working for SMC as a sales representative in SMC’s Cleveland branch. Shields remained at SMC until December 2011, when he left to take a job with another company. In December 2013, however, Shields returned to SMC. Shields was rehired by a Bruschi, who remained Shield’s direct supervisor until 2016. Shields was sixty years old when he was rehired by SMC.

On April 10, 2002, Lundgren notified Shields that his employment with SMC was terminated due to a COVID-19-related reduction in force. Shields was 66 years old at the time of his termination. Shields became upset and asked Lundgren if his termination was age-related. Lundgren refused to answer the question and told Shields to contact HR.

Ultimately, SMC laid off 127 employees from multiple divisions across the country. Williams, the other Cleveland-based Corporate Account Manager, was not terminated in the April 2020 layoffs. According to Lundgren, Williams’ direct supervisor, he did not consider selecting Williams for termination even though Williams had only just completed his 90-day introductory period and had no performance reviews as of April 2020. Likewise, Bruschi did not consider laying off Williams.

SMC filed a motion with the trial court seeking dismissal of Shields’ age discrimination claim. In support of its motion for dismissal, SMC maintained that Shields was selected for the reduction in force “based on his overall performance in connection with a companywide RIF as a result of the downturn in sales due to the COVID-19 pandemic.” SMC claimed that it arrived at this decision after “Bruschi weighed many unbiased metrics and determined that Shields was the proper candidate for the reduction in force due to his performance.” The trial court denied SMC’s motion for dismissal and ruled that Shields has presented sufficient evidence of age discrimination to proceed to a jury trial.

In denying SMC’s motion for dismissal the trial court focused on SMC’s decision to terminate Shields despite his superior qualifications to those of Williams, a significantly younger worker who held the same position as Shields. The trial court pointed out that “Shields had significantly more experience managing corporate sales than Williams,” and that Shields “possessed qualifications superior to those of Williams.” Despite Shields’ superior qualifications and experience, the trial court observed, “neither Bruschi nor Lundgren considered including Williams in the reduction in force” even though “Williams had only just completed his 90-day introductory period and had no real experience as a Corporate Account Manager.” Based on this evidence, the trial court concluded, a jury could “find that SMC chose to terminate Shields, the better-qualified Corporate Account Manager, and retain Williams, the less qualified Account Manager, because Shields was significantly older than Williams.”