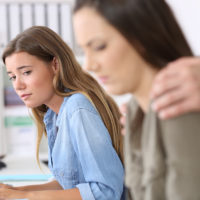 Having represented victims of sexual harassment for almost twenty years, our Citrus County, Florida sexual harassment attorneys have learned that harassment involving physical touching, even if not pervasive, can qualify as severe enough to constitute an alteration of the victim’s conditions of employment and create an abusive work environment for purposes of Title VII liability. As observed by the U.S. Seventh Circuit Court of Appeals in Worth v. Tyler, 276 F.3d 249 (7th Cir. 2001), “direct contact with an intimate body part constitutes one of the most severe forms of sexual harassment.” Thus, explained by the U.S. District Court for Minnesota in Grozdanich v. Leisure Hills Health Center, Inc., 25 F.Supp.2d 953 (D. Minn. 1998), sexual harassment “involving the unwanted touching or groping of a victim’s intimate body parts” has a “far greater potential to adversely alter the work environment, and with greater permanence, than would an offensive verbal remark, or a series of such remarks.”

The decision by the U.S. Fifth Circuit Court of Appeals in Cherry v. Shaw Coastal, Inc., 668 F.3d 182 (5th Cir. 2012) is instructive in showing that sexual harassment involving an element of physical invasion is more likely to be considered sufficiently severe to justify a finding of a hostile work environment. In that case, John Cherry (Cherry) brought a hostile work environment sexual harassment claim against his former employer, Shaw Coastal, Inc. (Shaw Coastal), pursuant to Title VII.

During his employment with Shaw Coastal, Cherry worked on a survey crew with a male employee named Reasoner. Cherry claimed that Reasoner subjected him to unwanted verbal and physical conduct of a sexual nature. Reasoner’s alleged sexual harassment towards Cherry included repeated requests that Cherry remove his shirt and pants, remarks about Cherry’s physical appearance, touching Cherry’s legs, shoulders, hair, and buttocks, sexual remarks, and sexual propositions. On one occasion, Reasoner allegedly asked Cherry to stay over at his house rather than return home after a long drive. When Cherry refused the invitation, saying he did not have a change of clothes, Reasoner said, “You don’t need to wear any clothes. You can wear my underwear.”

Despite complaints by Cherry and another employee to management about Reasoner’s sexual behavior, Shaw Coastal took no immediate action to correct the situation. Although Shaw Coastal eventually allowed Cherry to transfer to another crew, Reasoner’s harassment continued after his transfer. Ultimately, the human resources department opened an investigation into Cherry’s complaints. The human resources department concluded that it could not determine whether the conduct had occurred because there was not enough evidence and it was “one word against the other.” Consequently, the company took no further action. After the internal investigation was concluded, Cherry submitted a resignation letter citing the sexual harassment and the company’s failure to address it as the reason for his leaving the company.

The jury returned a verdict in favor of Cherry on his hostile work environment sexual harassment claim. However, the trial court determined that the jury’s verdict was not supported by the evidence and entered a judgment for Shaw Coastal. In overturning the jury’s verdict, the trial court concluded that Reasoner’s harassment was not sufficiently severe or pervasive to create a hostile work environment because the touching only happened over 14 days and Cherry was purportedly “overly sensitive to homoerotic teasing.” On appeal, the Fifth Circuit found that the trial court’s decision was legally erroneous and reversed the decision.

Based in Ocala, Florida and representing employees throughout Central Florida, we have almost twenty years of experience representing employees who have endured sexual misconduct in the workplace. If you have been the victim of sexual harassment or have questions about unwanted physical touching in the workplace, please contact our office for a free consultation with our Citrus County, Florida hostile work environment sexual harassment attorneys. Our employee rights law firm takes sexual harassment cases on a contingency fee basis. This means that there are no attorney’s fees incurred unless there is a recovery and our attorney’s fees come solely from the monetary award that you recover.