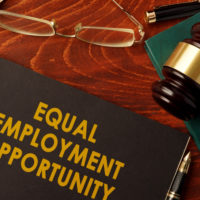 Title VII of the Civil Rights Act of 1964 (Title VII) prohibits employers from discriminating against employees because of their race, color, national origin, sex, or religion. It is well-established that failing to promote an individual because of his or her race, color, national origin, sex, or religion is an unlawful employment practice under Title VII. Having extensive experience representing individuals discriminatorily denied a promotion, our Central Florida employment discrimination attorneys have learned that courts in failure to promote cases often look at each piece of evidence in isolation, adopting an employer’s seemingly benign explanations for individual pieces of evidence, instead of viewing the evidence as a whole. In carving up the record in piecemeal fashion, courts have refused to acknowledge that, as explained by the U.S. Third Circuit Court of Appeals in Andrews v. City of Philadelphia, 895 F.2d 1469, 1484 (3d Cir. 1990), “a play cannot be understood on the basis of some of its scenes but only on its entire performance, and similarly, a discrimination analysis must concentrate not on individual incidents, but on the overall scenario.”

This practice of requiring each piece of evidence, standing alone, to establish a discriminatory failure to promote claim is perhaps best illustrated by the standard long used by the U.S. Eleventh Circuit Court of Appeals for determining whether an employer’s asserted non-discriminatory reason for failing to promote an employee was a pretext for discrimination. In order to establish discrimination in the failure to promote context by showing that the individual denied promotion was more qualified than the individual selected, the Eleventh Circuit required, until struck down by the U.S. Supreme Court, in cases such as Ash v. Tyson Foods, 129 Fed. Appx. 529 (11th Cir. 2005) a showing of superior qualifications that was “so apparent as virtually to jump off the page and slap you in the face.” A recent decision by the U.S. Tenth Circuit Court of Appeals in Sotunde v. Safeway, Inc., No. 15-1139 (10th Cir. Nov. 24, 2017) demonstrates that courts are required to consider the evidence in a discriminatory failure to promote case cumulatively.

In that case, Abiodum Sotunde (Sotunde), a naturalized U.S. citizen originally from Nigeria, claimed that his former employer, Safeway, Inc. (Safeway), failed to promote him on the basis of race, color, and national origin in violation of Title VII. In October 2004, Safeway hired Sotunde to work in a produce warehouse. In February 2005, Safeway promoted Sotunde to supervisor. While employed by Safeway, Sotunde earned a second bachelor’s degree in finance and a master’s degree in business administration. Despite his educational background, Safeway never promoted Sotunde about the position of supervisor. Sotunde resigned from Safeway in May 2013.

On two separate occasions, Sotunde applied for promotion to a manager position at the produce warehouse where he worked. The manager position required a four-year college degree or seven years of related work experience. After he applied for the positions, Safeway’s talent acquisition team identified him as a candidate who should proceed to the next step in the process. Sotunde’s supervisor named Grambusch decided who to interview and who would get the position. Grambusch did not select Sotunde for an interview. Grambusch filled the manager positions with white candidates who did not have a four-year college degree.

When viewing the “totality of the evidence,” the Tenth Circuit concluded that Sotunde has presented sufficient evidence to “allow a reasonable factfinder to disbelieve Safeway’s asserted explanations” for not promoting him to the manager positions. The appellate court found that from an educational standpoint Sotunde was more qualified that either successful candidate because he had two bachelor’s degrees and a master’s in business administration. Although perhaps not a “disparity in qualifications [ ] so apparent as virtually to jump off the page and slap you in the face” as required by the Eleventh Circuit until U.S. Supreme Court intervention, Sotunde’s superior qualifications nonetheless constituted circumstantial evidence of a discriminatory failure to promote.

The appellate court also pointed out that Grambusch relied on subjective criteria, such as “potential for success” and “leadership and communications skills,” in failing to promote Sotunde. The appellate court further noted that there were no African-American managers while Sotunde worked at the produce warehouse and there were no other African-American supervisors until after he complained of discrimination. Thus, although “some or all of these pieces of circumstantial evidence might not be enough in and of themselves” to prove Sotunde’s discriminatory failure to promote claim, the “evidence in its totality” was sufficient for a jury to disbelieve Safeway’s asserted reasons for not promoting Sotunde and find that discrimination was the real reason.