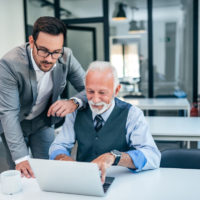 Having represented employment discrimination victims for almost two decades, our Marion County, Florida age discrimination lawyers know that employers continue to maintain mandatory retirement policies in violation of the Age Discrimination in Employment Act (ADEA). Under the ADEA, employers are forbidden from discriminating against employees on the basis of age. “One purpose of the ADEA,” as explained by the U.S. Eighth Circuit Court of Appeals in Hilde v. City of Eveleth, 777 F.3d 998 (8th Cir. 2015), “is to ensure that [older workers] are evaluated on their merits and not their age.”

Lawful Only In Rare Circumstances

In the overwhelming majority of cases, an employer’s mandatory retirement policy violates the ADEA. In order to be lawful under the ADEA, an employer must prove that its mandatory retirement policy is justified by the bona fide occupational qualification defense (BFOQ). The employer bears the burden of proving that the age limitation is a bona fide occupational qualification necessary to the performance of the duties of the job at issue. In seeking to establish the BFOQ defense, employers generally argue that the age limitation for the job at issue is necessary because of safety considerations. For example, the U.S. Fifth Circuit Court of Appeals in EEOC v. Exxon Mobile Corp., 560 Fed.Appx. 282 (5th Cir. 2014) concluded that Exxon’s mandatory retirement policy requiring its corporate pilots to retire at age sixty was justified by the BFOQ defense because of public safety concerns.

In Western Airlines v. Criswell, 472 U.S. 400 (1985), the U.S. Supreme Court ruled that the BFOQ defense was an “extremely narrow exception” to the ADEA’s prohibition against age discrimination. In its administrative regulations enforcing the ADEA, the U.S. Equal Employment Opportunity Commission (EEOC) has determined that the BFOQ defense has limited scope and application. An age discrimination lawsuit recently filed by the EEOC illustrates that an employer’s mandatory retirement policy is lawful only in rare and exceptional circumstances.

PE is an oral surgery practice based in metro Detroit. Ruerat began working for PE in 1978. For the next thirty-seven years, Ruerat was employed as a receptionist. Ruerat turned 65 years old on January 24, 2016. PE maintained a policy forcing employees to retire at age 65. On January 26, 2016, PE terminated Ruerat’s employment pursuant to its mandatory retirement policy.

Perhaps recognizing that its policy requiring employees to retire at age 65 violated the ADEA, and that it could not establish the BFOQ defense because Ruerat’s mandatory retirement at age 65 could not be justified by safety concerns, PE entered into a Consent Decree with the EEOC resolving the age discrimination lawsuit. In the Consent Decree, which was signed by U.S. District Court Judge Linda V. Parker on March 14, 2018, PE agreed to pay $47,000 to Ruerat in order to settle the age discrimination case.

The EEOC is the administrative agency of the United States responsible for interpreting and enforcing federal laws forbidding employment discrimination. In enforcing the federal civil rights laws, the EEOC is also authorized by federal law to bring lawsuits on behalf of victims of employment discrimination, including victims of age discrimination. In a press release issued by the EEOC regarding the case, a Regional Attorney for the EEOC’s Indianapolis District Office, Kenneth Bird, stated that “[p]rivate employers need to understand that mandatory retirement policies run afoul of the ADEA and will be met with challenge.”

By James P. Tarquin, P.A | Posted on September 5, 2019
Skip footer and go back to main navigation