Is Targeting An Older Worker For Discharge Because Of A High Salary Unlawful Age Discrimination? 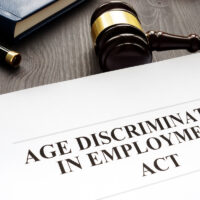 Having represented age discrimination victims for more than two decades, our Marion County, Florida age discrimination lawyers know that employers often target older workers for termination because of their high salaries. In doing so, employers argue that they are lawfully entitled to eliminate older workers who make more money than younger employees in order to reduce costs. Employers further argue that because the termination decision is purportedly motivated by costs savings and not age, older employees who are targeted for termination because of their high salaries are not being discriminated against on the basis of their age. In this article, our Ocala, Florida age discrimination attorneys explain how the decision by the U.S. Eighth Circuit Court of Appeals in Leftwich v. Harris-Stowe State College, 702 F.2d 686 (8th Cir. 1983) illustrates that the alleged economic savings derived from terminating older workers is not a legitimate justification under the Age Discrimination in Employment Act (ADEA) for selecting older employees for termination.

In that case, Bob Leftwich (Leftwich) brought an age discrimination lawsuit against his former employer, Harris-Stowe State College (Harris-Stowe), pursuant to the ADEA. Under the ADEA, employers are prohibited from firing older workers because of their age. Leftwich claims that Harris-Stowe violated the ADEA by terminating his employment when the college was transferred to the state college system.

Prior to 1979, the St. Louis Board of Education operated Harris-Stowe College. In 1978, the Missouri Legislature enacted a statute to transfer control of Harris-Stowe to the state college system. Shortly thereafter, the governor appointed a six-member Board of Regents for Harris-Stowe State College. After the transfer, the accreditation, facilities, and curriculum and student body of the college remained largely unchanged. The Regents, however, decided to hire new faculty for the “new” state college. For assistance in the transition and faculty selection process, the Regents hired an education consultant, a man named Joseph. Joseph then recommended a plan which would reduce the faculty from the fifty-one members to approximately thirty-four. Under that plan, the Regents would initially select a designated number of faculty members who were tenured at the “old” city college and a designated number of nontenured teachers from that college.

Older Worker Targeted For Discharge To Save Money

The Regents adopted Joseph’s plan and invited faculty members of the “old” city college to submit applications for positions with the “new” state college. After reviewing all applications, Joseph recommended thirty-three faculty members from the “old” city college to be selected for the “new” state college. The Regents accepts all of these recommendations. The teachers who were not selected were sent termination letters.

Leftwich was not recommended by Joseph and ultimately received a termination letter. At the time of his discharge, Leftwich was forty-seven years old. Leftwich joined the Harris-Stowe faculty as a lecturer in 1968. In 1972, Leftwich was promoted to assistant professor in the biology department. In 1975, Leftwich was appointed chairman of the biology department. Leftwich was one of three biology teachers at the “old” city college who applied for a position at the “new” state college. Under Joseph’s plan, the “new” college had only two biology positions available—one tenured and one nontenured. The Regents selected a sixty-two year old man for the tenured position, and thirty-year old man for the nontenured position. To explain the choices for the two biology positions, Joseph told Leftwich that he had been a “victim of tenure density.”

At outset of its opinion, the Eighth Circuit noted the purpose of the ADEA. “In enacting the ADEA,” the appellate court explained, “Congress was plainly concerned about unemployment among older workers and the difficulty they encounter in obtaining or retaining employment.” “The express purpose of the [ADEA] is to promote employment of older persons based on their ability rather than age and to prohibit arbitrary age discrimination in employment.”

Turning to Harris-Stowe’s argument that its selection plan did not discriminate on the basis of age because it was based on tenure status and not age, the Eighth Circuit agreed that the “selection plan was based on tenure status rather than explicitly on age.” However, the appellate court explained, “because of the close relationship between tenure status and age, the plain intent and effect of [Harris-Stowe’s] practice was to eliminate older workers who had built up through years of satisfactory service, higher salaries than their younger counterparts.” “If the existence of such higher salaries can be used to justify discharging older workers,” the court of appeals pointed out, “then the purpose of the ADEA would be defeated.” In other words, the Eighth Circuit reasoned, to allow employers to target older employees for termination because of their higher salaries would “serve only to perpetuate and promote the very discrimination at which the [ADEA] is directed.”