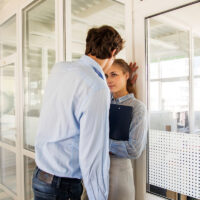 Once an employer knows or should know of sexual harassment in the workplace, Title VII requires the employer to take prompt and effective corrective action to stop the sexual harassment. As explained by the U.S. Ninth Circuit Court of Appeals in Swenson v. Potter, 271 F.3d 1184 (9th Cir. 2001), when an employer “fails to take corrective action after learning of an employee’s sexually harassing conduct, or takes inadequate action that emboldens the harasser to continue his misconduct, the employer can be deemed to have adopted the offending conduct and its results, quite as if they had been authorized affirmatively as the employer’s policy.”

The EEOC claims that Colony Diner violated Title VII by creating and maintaining a sexual hostile work environment. The EEOC further alleges that Colony Diner violated Title VII by retaliating against female employees who objected to or complained about the sexual harassment they endured. The EEOC also claims that many of the female employees who endured hostile work environment sexual harassment were constructively discharged in violation of Title VII because they were forced to quit due to intolerable working conditions.

Colony Diner is a restaurant located in East Meadow, New York. The female employees worked at Colony Diner as servers or hostesses. The EEOC alleges that the female workers were subjected to a sustained campaign of sexually harassing behavior by the owners of Colony Diner. The unwanted sexually harassing behavior of one owner towards the female employees included sexual touching, physical touching of a sexual nature, sexual comments, remarks about their body, and instructions to wear tight and revealing clothing. The unwanted sexually harassing behavior of the other owner towards the female workers included sexual propositions, sexual comments, remarks about their body, and repeated inquiries about their personal lives.

The EEOC contends that when the female workers objected to or complained about the sexual harassment they endured, one of the owners retaliated against them by changing their scheduled shifts and assigning them to the least lucrative sections of the restaurant in order to cause a reduction in tip earnings. The EEOC maintains that because of the intolerable working conditions due to the on-going sexual harassment and retaliation, many of the female employees were compelled to resign their employment and, thus, were constructively discharged in violation of Title VII.

The EEOC is the administrative agency of the United States with the obligation under federal law for interpreting and enforcing the federal employment laws prohibiting discrimination, harassment, and retaliation. As part of its statutory mandate to eliminate unlawful discriminatory employment practices from the American workplace, the EEOC brings lawsuits in federal court on behalf of sexual harassment victims.

In a press release issued by the EEOC on June 3, 2021 regarding the case, the Director of the EEOC’s New York District Office, Judy Keenan, explained that “once an employer becomes aware of workplace harassment, the law requires that it investigate and take prompt corrective action to stop the unlawful conduct.” “That includes sexual harassment,” Ms. Keenan noted, “as well as derogatory remarks based on an employee’s sex.” In commenting on the case, a regional attorney for the EEOC’s New York District Office, Jeffrey Burstein, stated that “a hostile work environment created by the employer’s owners or high-level managers can be especially devastating to harassment victims.” “Under federal employment discrimination law,” Mr. Burstein observed, “when the owner, CEO, or president of a company is proven to have created the hostile work environment, the company will almost always be liable.”

Based in Ocala, Florida and representing employees throughout Central Florida, our Marion County, Florida workplace harassment lawyers have dedicated their practice to representing Florida employees who have been required to work in a sexually hostile work environment. If you have experienced sexual harassment in the workplace or have questions about an employer’s obligation to protect you from sexual harassment at work, please contact our office for a free consultation with our Ocala, Florida workplace harassment attorneys. Our employment and labor law attorneys take workplace harassment cases on a contingency fee basis. This means that there are no attorney’s fees incurred unless there is a recovery and our attorney’s fees come solely from the monetary award that you recover.