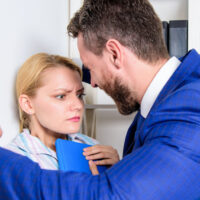 Georgina’s is a restaurant in Traverse City, Michigan. The EEOC alleges that throughout her employment with Georgina’s, Werthen was sexually harassed by Georgina’s owner. The owner’s unwanted sexual conduct, according to the EEOC, included sexual remarks, sexual propositions, remarks about her buttocks, telling her that he thought about her in the shower, and identifying female customers he wanted to have sex with. The EEOC further alleges that the owner engaged in sexually harassing behavior towards other female employees. The owner’s alleged sexual conduct towards other female employees included sexually touching them, kissing them without consent, forcing them to sit on his lap, and ordering them to approach restaurant guests he found sexually desirable and obtain their phone numbers for him.

The EEOC alleges that Werthen was retaliated against after she complained about the owner’s sexual behavior to the owner and other managers. After Werthen verbally complained about the owner’s sexually harassing conduct to the owner and another manager in early January 2016, the owner stripped her of authority in the kitchen, gave her less favorable shifts, cut her hours, and was openly hostile and abusive towards her. On February 7, 2016, according to the EEOC, Werthen submitted a written complaint of sexual harassment by the owner to another member of management. Within ten minutes of Werthen submitting the complaint, the owner received it and fired her.

The EEOC, which is an administrative agency of the federal government, is responsible for interpreting and enforcing the federal anti-discrimination laws, including Title VII. As part of its statutory mission to enforce employee rights under the federal anti-discrimination laws, the EEOC brings federal court lawsuits on behalf of employment discrimination victims, including sexual harassment and retaliation victims. In a press release issued by the EEOC on February 4, 2021 regarding the case, a regional attorney for the EEOC’s Indianapolis District Office, Kenneth Bird, stated that “the owner’s behavior was egregious and widespread.” The Consent Decree, Mr. Bird added, “reflects the EEOC’s commitment to stand up to such behavior.”

By James P. Tarquin, P.A | Posted on February 5, 2021
Skip footer and go back to main navigation