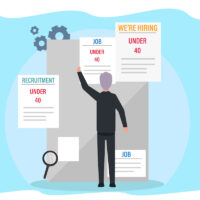 In a press release issued on March 5, 2021, the EEOC announced that it has entered into a Consent Decree with the Michigan Department of Health and Human Services (MDHHS) to settle an age discrimination lawsuit. On September 28, 2018, the EEOC filed the age discrimination case, U.S. E.E.O.C v. Michigan Department of Health and Human Services, Case No. 1:18-cv-01127, in the U.S. District Court for the Western District of Michigan. In the Consent Decree, which was endorsed by U.S. District Court Judge Hala Y. Jarbou on March 4, 2021, the MDHHS agreed to pay $115,000 to resolve the age discrimination case.

Job Applicant Not Hired Because Of Age

The MDHHS operates the Kalamazoo Psychiatric Hospital in Kalamazoo, Michigan. In December 2015, DeWaters applied for the position of clinical social worker at the Kalamazoo Psychiatric Hospital. DeWaters was fifty-six years old when she applied for the position. The Clinical Services Director of the Kalamazoo Psychiatric Hospital was a newly-hired thirty-one year old man. DeWaters was unanimously recommended, according to the EEOC, as the candidate to hire by three members of the interview panel. Despite the recommendation of the interview panel, the EEOC contends that the newly-hired Clinical Services Director elected to hire a much younger and less qualified candidate under the age of forty. The EEOC further maintains that the newly-hired Clinical Services Director “cited a preference for younger candidates as the reason” for hiring a younger employee.

Employee Quits Because Of Age Discrimination

From June 1998 until her involuntary retirement in October 2018, Luchies worked as a social worker at the Kalamazoo Psychiatric Hospital. Before the newly-hired Clinical Services Director became her supervisor in November 2015, Luchies had received “high performance” ratings in her most recent annual performance review. The EEOC contends that the newly-hired Clinical Services Director targeted Luchies for age-based discriminatory treatment by assigning Luchies to work in the most difficult area of the hospital, compiling a list of purported problems with her work, and speaking to her in a derogatory manner. No other social worker, according to the EEOC, was subjected to the same kind of scrutiny, evaluation, or treatment. Because of the age-based discriminatory treatment, the EEOC maintains that Luchies was compelled to resign her employment. Luchies was fifty-nine years old when her employment ended.

The EEOC, which is an administrative agency of the federal government, is responsible for interpreting and enforcing the federal anti-discrimination laws. In seeking to protect and vindicate the rights of older workers, the EEOC files lawsuits on behalf of age discrimination victims. In a press release issued by the EEOC on March 5, 2021 regarding the case, a trial attorney for the EEOC’s Detroit Field Office, Dale Price, explained that the “ADEA is clear—no employer can deny hire to an applicant because it prefers younger candidates.” Under the ADEA, Mr. Price further explained, “employers cannot single out older workers for performance issues while ignoring those of younger employees.”