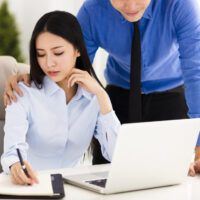 On June 7, 2021, the EEOC issued a press release announcing that it has entered into a Consent Decree settling a sexual harassment lawsuit against Total Maintenance Solutions, Inc. (TMS). On June 13, 2018, the EEOC filed the sexual harassment case, U.S. Equal Employment Opportunity Commission v. Total Maintenance Solutions, Inc.,Case No. 1:18-cv-00413, in the U.S. District Court for the Southern District of Ohio. In the Consent Decree, which was endorsed by U.S. District Court Judge Michael R. Barrett on June 7, 2021, TMS agreed to pay $22,500 to resolve the sexual harassment lawsuit.

The EEOC filed the sexual harassment lawsuit pursuant to Title VII of the Civil Rights Act of 1964 (Title VII) on behalf of a former employee of TMS, Aaliya Thomas (Thomas). Title VII prohibits employers from discriminating against employees on the basis of sex. In Meritor Sav. Bank v. Vinson, 477 U.S. 57 (1986), the U.S. Supreme Court ruled that sexual harassment which is sufficiently severe or pervasive to alter the conditions of the victim’s employment and create a hostile or abusive working environment violates Title VII. The Meritor Court explained that employees are not required to run a “gauntlet of sexual abuse in return for the privilege of being allowed to work and make a living.” Title VII protects employees against sexual harassment in the workplace from co-workers, supervisors, managers, owners, clients, and customers.

TMS is a commercial cleaning company. In June 2017, TMS hired Thomas as an office manager. Throughout her employment, the EEOC contends, Thomas was subjected to unwanted sexually harassing behavior by the owner of TMS. The owner’s alleged sexual harassment towards Thomas included sexual remarks, comments about her body, and calling her at night after work hours suggesting a sexual relationship. Despite Thomas’ repeated complaints about the sexually hostile work environment, the owner would not stop the sexually harassing behavior. After making repeated verbal complaints about the sexual harassment to the owner, Thomas sent a text message to the owner asking him to stop the harassment. In retaliation, the EEOC maintains, the owner ordered Thomas to clean the office restroom, a duty not in her job description. When Thomas refused to clean the restroom, the owner fired Thomas.

The EEOC is the administrative agency of the United States charged with interpreting and enforcing the federal civil rights laws prohibiting discrimination, harassment, and retaliation. In order to deter and punish employers who require their employees to work in a sexually hostile work environment, the EEOC brings lawsuits in federal court on behalf of sexual harassment victims.

In a press release issued by the EEOC on June 7, 2021 regarding the case, a regional attorney for the EEOC’s Indianapolis District Office, Kenneth Bird, explained that “sexual harassment is a form of discrimination, it is illegal and will not be tolerated.” “While that should be clear by now to all employers,” Mr. Bird observed, “some continue to ignore the law.” “Employers should be on notice,” Mr. Bird added, “that the EEOC will act aggressively to protect people from this type of discrimination.”