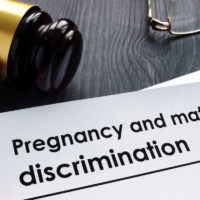 On December 10, 2018, the EEOC filed the lawsuit, EEOC v. 40 East, Inc., d/b/a 40 Steak & Seafood, Case No. 1:18-cv-260, in the U.S. District Court for the District of North Dakota after initially attempting to reach a pre-litigation settlement through its statutorily mandated conciliation process. In this article, our Citrus County, Florida employment discrimination lawyers explain the EEOC’s allegations against 40 Steak and illuminate the legal basis for the EEOC’s pregnancy discrimination lawsuit.

As observed by the U.S. Second Circuit Court of Appeals in Rosen v. Thornburgh, 928 F.2d 528 (2d Cir. 1991), “an employer who discriminates is unlikely to leave a ‘smoking gun,’ such as a notation in an employee’s personnel file, attesting to a discriminatory intent.” Thus, as explained by the U.S. First Circuit Court of Appeals in Hodgens v. General Dynamics Corp., 144 F.3d 151 (1st Cir. 1998), “smoking gun evidence is, of course, not required to prove discrimination.”

The EEOC is the administrative agency of the United States responsible for interpreting and enforcing federal laws prohibiting employment discrimination, including pregnancy discrimination. In enforcing the federal anti-discrimination laws, the EEOC is also authorized by federal law to bring lawsuits on behalf of victims of employment discrimination. In a press release regarding the case, the regional attorney for the EEOC’s Chicago District Office, Greg Gochenour, stated that “[p]regnancy discrimination is a continuing problem in the United States.” “The rule is simple,” Mr.Gochenour explained, “don’t fire someone, or treat someone adversely in any way, simply because she is pregnant.”