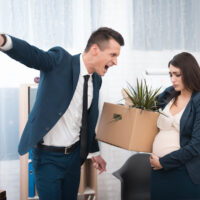 In a press release issued on September 27, 2019, the U.S. Equal Employment Opportunity Commission (EEOC) announced that it has filed a pregnancy discrimination lawsuit against AAC Dallas Outpatient Center, LLC, d/b/a Greenhouse Outpatient Center (Greenhouse) pursuant to the Pregnancy Discrimination Act (PDA). The PDA prohibits employers from discriminating against women on the basis of pregnancy, childbirth, or related medical conditions. The PDA’s protection against pregnancy discrimination extends to all employees and applicants for employment.

Pregnant Employees Must Be Treated Equally

On September 27, 2019, the EEOC filed the pregnancy discrimination lawsuit, U.S. Equal Employment Opportunity Commission v. American Addiction Centers, Inc. & AAC Dallas Outpatient Center, LLC, Case No. 3:19-cv-02302, in the U.S. District Court for the Northern District of Texas after initially attempting to reach a pre-litigation settlement through its statutorily mandated conciliation process. The EEOC has brought the pregnancy discrimination lawsuit on behalf of a former employee of Greenhouse, Stefanie Armstrong (Armstrong). In this article, our Gainesville, Florida employment discrimination lawyers explain the EEOC’s allegations against Greenhouse.

On October 26, 2015, Armstrong was hired by American Addiction Centers, Inc. as a behavioral health technician to work at its subsidiary Greenhouse. In February 2016, Armstrong asked Greenhouse’s Human Resources (HR) Director how to submit a request for maternity leave under the Family Medical Leave Act. The HR Director informed Armstrong that she was not FMLA-eligible until October 26, 2016.

On April 30, 2016, Armstrong was granted a leave of absence from May 1, 2016 until May 30, 2016 for childbirth. Armstrong gave birth by emergency cesarean section on May 1, 2106. On May 26, 2016, Armstrong notified the HR Director that her doctor required her to take an additional 30 days of leave in order to recover from the cesarean section. On May 27, 2016, the HR Director notified Armstrong that her position could not be held open past May 30, 2016, but Armstrong could reapply for employment after she was cleared to work.

On May 30, 2016, Greenhouse terminated Armstrong’s employment because she was unable to return to work after 30 days of leave. However, according to the EEOC, Greenhouse granted non-pregnant employees who were unable to work for reasons unrelated to pregnancy a leave of absence beyond 30 days. Thus, the EEOC contends that Greenhouse treated Armstrong differently and less favorably from non-pregnant employees because it accommodated non-pregnant employees by giving them leave past 30 days but refused to similarly accommodate Armstrong by giving her leave past 30 days. The differences in treatment, the EEOC maintains, establishes that Armstrong was discriminated against on the basis of pregnancy in violation of the PDA.

The EEOC is the administrative agency of the United States responsible for interpreting and enforcing federal laws forbidding employment discrimination. In enforcing the federal civil rights laws, the EEOC is also authorized by federal law to bring lawsuits on behalf of victims of employment discrimination, including employees who have been fired on the basis of pregnancy, childbirth, or related conditions. In a press release issued by the EEOC regarding the case, a trial attorney for the EEOC’s Dallas District Office, Meaghan Kuelbs, explained that “[i]f an employer accommodates portions of its workplace, it must offer the same accommodations to pregnant employees.” “In this case,” Ms. Kuelbs observed, “the employer granted exceptions to its leave policy for non-pregnant employees but did not afford its pregnant employees the same opportunity.”