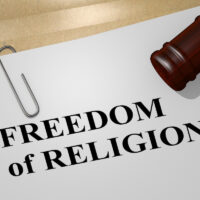 In a press release issued on July 20, 2020, the U.S. Equal Employment Opportunity Commission (EEOC) announced that it has filed a religious discrimination lawsuit against United Airlines, Inc. (United). On July 19, 2020, the EEOC filed the case, U.S. Equal Employment Opportunity Commission v. United Airlines, Inc., Case No. 3:20-cv-9100, in the U.S. District Court for the District of New Jersey after initially trying to settle the case through its statutorily required conciliation process. Unable to settle the case through conciliation efforts, the EEOC then attempted to resolve the alleged unlawful employment practices through litigation.

The EEOC filed the religious discrimination lawsuit pursuant to Title VII of the Civil Rights Act of 1964 (Title VII) on behalf of an employee of United, David Disbrow (Disbrow). Under Title VII, employers are forbidden from discriminating against employees on the basis of religion. Title VII also requires that employers make reasonable accommodations for their employees’ religious beliefs and practices. The EEOC claims that United discriminated against Disbrow by refusing to reasonably accommodate his religious beliefs. In this article, our Calhoun County, Florida employment discrimination lawyers explain the EEOC’s allegations of religious discrimination against United.

Disbrow has been employed for United as a pilot for over 30 years. His base is Newark International Airport. Disbrow is a Buddhist. In 2017, Disbrow was diagnosed as alcohol dependent. In January 2018, Disbrow entered a residential alcohol treatment program. As a result of his alcohol dependence diagnosis, Disbrow’s medical certification issued by the Federal Aviation Administrative (FAA) was revoked.

One of the requirements of United’s HIMS program is that participating pilots must regularly attend meetings of Alcoholics Anonymous (AA), a support group focused on ensuring that its members abstain from alcohol based on “Twelve Steps” and obtain an AA sponsor. United’s HIMS program requires that all participants complete at least the first five of the Twelve Steps, three of which require acknowledging a “Power greater than ourselves” and “God.” All AA meetings near Disbrow were held in churches and began with a prayer. The FAA does not mandate that a HIMS program require all participants to attend AA. Nor does the FAA require a pilot who has been diagnosed as alcohol dependent to attend AA in order to eligible for a special issuance medical certification.

Disbrow enrolled in United’s HIMS program in March 2018. At the same time that he attended AA meetings, Disbrow also attended meetings of Refuge Recovery, a support group focused on ensuring its members abstain from alcohol and other drugs that is similar to AA, but based on Buddhist principles. Soon after enrolling in the HIMS program, Disbrow asked to substitute attendance at Refuge Recovery instead of AA attendance as a reasonable accommodation for his religious beliefs. Disbrow made this request because he objected to the religious content of AA, which contradicted his Buddhist beliefs.

Fighting For Rights Of Employees

The EEOC is the administrative agency of the United States responsible for interpreting and enforcing federal employment laws prohibiting discrimination, including religious discrimination. In enforcing the federal employment laws, the EEOC is also authorized to bring lawsuits on behalf of employees who have been discriminated against on the basis of religion. In a press release issued by the EEOC on July 20, 2020 regarding the case, a regional attorney for the EEOC’s New York District Office, Jeffrey Burstein, explained that “employers have the affirmative obligation to modify their policies to accommodate employees’ religious beliefs.” “Despite this obligation,” Mr. Burstein contended, “United was inflexible and refused to make a modest change [to] its program that would have caused them no undue hardship.” In commenting on the case, the Director for the EEOC’s New York District Office, Judy Keenan, stated that the “EEOC stands ready to protect employees against discrimination on the basis of their religion.”