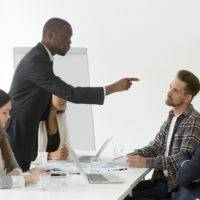 On June 26, 2019, the EEOC filed the lawsuit, EEOC v. George W. Morosani & Associates, LLC, Case No. 1:19-cv-203, in the U.S. District Court for the Western District of North Carolina after initially attempting to reach a pre-litigation settlement through its statutorily mandated conciliation process.  The EEOC has brought the retaliation lawsuit on behalf of a former employee of Morosani, Terrance Stubblefield (Stubblefield).  The EEOC claims that Stubblefield was unlawfully fired in retaliation for complaining about perceived racial discrimination against him.  In this article, our Marion County, Florida employment discrimination attorneys explain the EEOC’s allegations against Morosani.

The EEOC is the administrative agency of the United States responsible for interpreting and enforcing federal laws prohibiting employment discrimination, harassment, and retaliation.  In enforcing the federal civil rights laws, the EEOC is also authorized by federal law to bring lawsuits on behalf of victims of employment discrimination, harassment, and retaliation.  In a press release issued by the EEOC regarding the case, a Regional Attorney for the EEOC’s Charlotte District Office, Lynnette A. Barnes, stated that “[a]n employer cannot fire an employee for reporting the use of racial slurs or other discriminatory conduct in the workplace.”  “Companies should put their energy into eradicating such misconduct,” Ms. Barnes explained, “rather than punishing those who report it.”  Ms. Barnes added, the “EEOC will continue to fight for discrimination victims.”