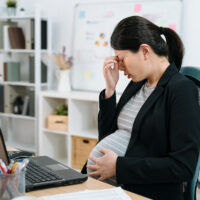 On December 14, 2020, the U.S. Equal Employment Opportunity Commission (EEOC) issued a press release announcing that it has entered into a Consent Decree resolving a pregnancy discrimination lawsuit against DoodyCalls, Inc. (DCI). On September 19, 2019, the EEOC filed the case, U.S. Equal Employment Opportunity Commission v. DoodyCalls, Inc., Case No. 8:19-cv-02757, in the U.S. District Court for the District of Maryland. Before filing the litigation, the EEOC tried to reach a pre-litigation settlement through its voluntary conciliation process. Unable to reach an acceptable settlement through voluntary conciliation efforts, the EEOC filed the lawsuit in order to remedy the alleged discriminatory employment practices.

The EEOC filed the pregnancy discrimination lawsuit pursuant to Title VII of the Civil Rights Act of 1964, as amended by the Pregnancy Discrimination Act (PDA), on behalf of a former employee of DCI, Amanda Peal (Peal). Under the PDA, employers are prohibited from discriminating against women on the basis of pregnancy, childbirth, or related medical conditions. The PDA further mandates that employers must treat women affected by pregnancy, childbirth, or related medical conditions the same as non-pregnant employees, whether male or female, who are similar in the ability or inability to work. Under the PDA, an employer cannot discriminate against employees, such as demoting or discharging them, with pregnancy related medical restrictions when they are able to perform their job duties. The EEOC claims that DCI violated the PDA by firing Peal because of her pregnancy.

DCI is a pet waste removal company based in Charlottesville, Virginia. In February 2019, Peal was hired by DCI to work as a waste technician. In this position, Peal was responsible for collecting and disposing of pet waste from residential and commercial sites. At the time of her hire, Peal was approximately four months pregnant, but had not yet disclosed her pregnancy to DCI. Shortly after she was hired, Peal disclosed her pregnancy to DCI’s Operations Manager.

Just a few weeks into her employment, on March 4, 2019, Peal underwent emergency surgery as a result of an incompetent cervix. Peal received a cerclage—the attaching of her cervix to prevent further dilation—with the goal of promoting a full-term pregnancy. On March 12, 2019, a week into Peal’s recovery, her doctor released her to return to work. Peal informed the Operations Manager that she was cleared to return to work, but also shared that her doctor had told Peal that her pregnancy was still high-risk and to avoid anything “too strenuous.”

The next day, March 13, 2019, Peal provided the Operations Manager with a written release to return to work. The Operations Manager expressed concern about Peal performing the job while high-risk. Peal explained that she should avoid lifting over 20 pounds and should take a five-to-ten minute break after six hours of walking. The Operations Manager responded that he could not guarantee providing Peal with the requested accommodations; that he was concerned about the company’s liability; that this was not the right time for her to be in the job; and that she could seek rehire after her pregnancy. That day, March 13, 2019, was Peal’s final day of work.

The EEOC claims that DCI could have provided Peal with her requested accommodations without eliminating any essential function of her position. Consistent with DCI’s written job description, Peal’s job of pet waste technician allowed her the choice of removing pet waste in ten pound, twenty pound, or fifty pound increments. Thus, Peal was never required to lift more than 20 pounds. The EEOC further claims that nothing in DCI’s written job description for a pet waste technician requires walking for six straight hours without a five-to-ten minute break. Consequently, the EEOC maintains that Peal was able to perform the duties of her position despite her pregnancy related medical restrictions.