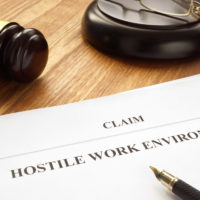 The U.S. Equal Employment Opportunity Commission (EEOC) recently announced that it has entered into a Consent Decree to settle a racial harassment lawsuit filed by the EEOC against Murex Petroleum Corp. (Murex). On September 27, 2017, the EEOC filed the lawsuit, U.S. Equal Employment Opportunity Commission v. Murex Petroleum Corp., Case No. 1:18-cv-169, in the U.S. District Court for the District of North Dakota after initially attempting to reach a pre-litigation settlement through its statutorily mandated conciliation process.

The EEOC brought the racial harassment lawsuit pursuant to Title VII of the Civil Rights Act of 1964 (Title VII) on behalf of a former employee of Murex, Derrick Jenkins (Jenkins). The EEOC claims that Murex discriminated against Jenkins when it subjected him to harassment based on his race, African-American. Racial harassment is a form of race discrimination prohibited by Title VII. In this article, our Marion County, Florida race discrimination lawyers explain the EEOC’s allegations against Murex and the Consent Decree.

Murex is an oil and gas company operating in North Dakota. From April 2014 to September 2014, Jenkins worked for Murex as a roustabout. During his employment, according to the EEOC, Jenkins was subjected to racial harassment by his white co-workers. The alleged harassment included racial derogatory remarks and racial slurs. The EEOC claims that the harassment was witnessed by Jenkins’ supervisor, but no action was taken to prevent the harassment from continuing. The EEOC further alleges that another African-American employee complained to a high-level executive about the racial harassment, but no action was taken to stop the harassment. The EEOC contends that the racial harassment was sufficiently severe or pervasive to alter the conditions of Jenkins’ employment and create a racial hostile work environment in violation of Title VII.

The EEOC also required Murex to take measures to protect the rights of Jenkins. The EEOC mandated that the Murex provide a neutral employment reference for Jenkins that contains dates of employment, position held, and stating that the “satisfactorily” performed his job duties. When providing reference check information regarding Jenkins, the EEOC obligated Murex to inform prospective employers only of the dates of employment and the position held, and state that Jenkins was a satisfactory employee who performed his job duties.

The EEOC is the administrative agency of the United States responsible for interpreting and enforcing federal laws prohibiting employment discrimination, including racial harassment. The EEOC is also authorized by federal law to bring lawsuits on behalf of victims of employment discrimination, including racial harassment. In a press release issued by the EEOC regarding the case, the District Director for the EEOC’s Chicago District Office, Julianne Bowman, stated that “[e]mployers must recognize the importance of acting promptly to address complaints of racial harassment.” “Racial slurs cannot be allowed to go unchecked in the workplace,” Ms. Bowman added, “and such behavior must be stopped immediately when the employer has knowledge of such misconduct.”

Based in Ocala, Florida and representing employees throughout Central Florida, we have represented employment discrimination victims in hundreds of cases before the EEOC. If you have been subjected to racial harassment at work or have questions about an employer’s obligation to protect you from racial harassment in the workplace, please contact our office for a free consultation with our Marion County, Florida race discrimination attorneys. Our employment and labor law attorneys take race discrimination cases on a contingency fee basis. This means that there are no attorney’s fees incurred unless there is a recovery and our attorney’s fees come solely from the monetary award that you recover.