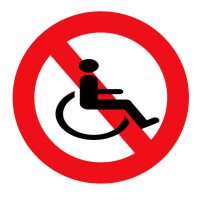 The EEOC brought the disability discrimination lawsuit pursuant to the Americans with Disabilities Act (ADA), as amended by the ADA Amendment Act of 2008, on behalf of an individual who applied for employment with Crothall, a man named Pack (Pack). Under the ADA, employers are forbidden from discriminating against job applicants and employees on the basis of disability. The ADA further mandates that employers reasonably accommodate job applicants and employees with a disability. The EEOC maintains that Crothall discriminated against Pack in violation of the ADA by failing to hire him because of his disability.

Crothall provides laundry and linen services to hospitals. On September 15, 2017, Pack applied for a position as a laundry services worker at Crothall’s facility in Rome, Georgia. The EEOC contends that Pack is a disabled individual within the meaning of the ADA because he suffers from cerebral palsy and deafness. After Pack submitted his job application, the plant manager of the Rome facility asked Pack to come to the facility for an on-site interview.

On October 19, 2017, the plant manager left Pack a voice mail message stating that all positions had been filled and that even if Pack was hired, the company would not be able to pay him its customary wage rate for the laundry services worker position. One week later, the plant manager left another voice mail message with Pack stating that the position Pack was seeking had been filled and that the company would send Pack a request to re-apply when a position became available. Corthall, according to the EEOC, never contacted Pack again.

The EEOC contends that despite claiming that the company had filled the position sought by Pack and would contact pack when the position became available, Crothall hired more than eighty non-disabled laundry service workers between September 2017 and May 2018. The EEOC further maintains that a laundry services worker position was available at the Rome facility from September 26, 2017 through November 10, 2017. Thus, the EEOC contends that Crothall could have hired Pack at any time after giving him an interview and plant tour.

In a press release issued on July 29, 2021 regarding the case, a regional attorney for the EEOC’s Atlanta District Office, Marcus G. Keegan, observed that “an employer cannot legally refuse to hire a qualified applicant because of his disability.” In commenting on the case, the Director of the EEOC’s Atlanta District Office, Darrell Graham, stated that the “EEOC is committed to seeking relief for those who suffered disability discrimination in the workplace.”