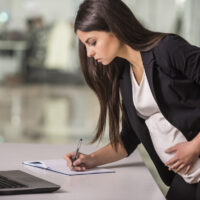 The EEOC has brought the pregnancy discrimination lawsuit pursuant to the Pregnancy Discrimination Act of 1978 (PDA) on behalf of a former employee of LogisticCare and HCM Staffing, Tiffany Lewis (Lewis). The PDA prohibits employers from discriminating against women on the basis of pregnancy, childbirth, or related medical conditions. Under the PDA, employers are also forbidden from making employment decisions based on stereotypes about pregnancy. For example, employers are prohibited from terminating pregnant employees based on stereotypes about a pregnant employee’s commitment to the job, physical ability to do the work, or work attendance.

Fired Because Of Pregnancy

The EEOC is the administrative agency of the United States responsible for interpreting and enforcing federal employment laws prohibiting discrimination in the workplace, including discrimination on the basis of pregnancy. In enforcing the federal anti-discrimination laws, the EEOC is also granted the authority by federal law to file lawsuits on behalf of pregnancy discrimination victims. In a press release issued by the EEOC on May 4, 2020 regarding the case, a regional attorney for the EEOC’s Phoenix District Office, Mary Jo O’Neill, explained that “employers should not make employment decisions based on assumptions about what pregnant employees can and cannot do.” “Pregnancy discrimination remains a significant barrier for women in the workplace,” Ms. O’Neill added, “and the EEOC will always be dedicated to fighting it.”