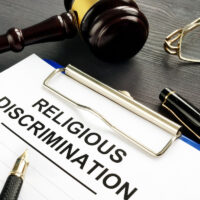 The EEOC claims that Quest discriminated against Grandison in violation of Title VII by refusing to reasonably accommodate her religious beliefs and subsequently terminating her employment because of her religion.

Quest is a provider of medical diagnostic information services that aid in the diagnosis and detection of diseases. Grandison is a Seventh-Day Adventists. Grandison has a sincerely held religious belief that she cannot work on her Sabbath, from sundown on Friday to sundown on Sunday. This sincerely held religious belief also prohibits her from asking others to work for her on the Sabbath. In August 2008, Grandison was hired by Quest as a phlebotomist. Grandison notified Quest of her prohibition against working on her Sabbath. Quest approved Grandison’s request for an accommodation of her religion and did not schedule Grandison to work on her Sabbath for a ten-year period from August 2008 through September 2018.

On September 21, 2018, Grandison was notified by her supervisor that Quest would no longer be able to accommodate her religious prohibition against working on the Sabbath. Grandison provided documentation to Quest from the Texas Conference of Seventh-Day Adventists attesting to her religious-based need to be excused from working on her Sabbath. On March 4, 2019, Quests’ human resources department denied Grandisons request for a religious accommodation and informed Grandison that providing her with this religious accommodation would impose an undue hardship on other employees.

Grandison honored her religious obligation and called-out from work on every Saturday shift that she was scheduled to work following the revocation of her religious accommodation: November 24, 2018; December 29, 2018; February 2, 2019; March 9, 2019; and April 14, 2019. On April 25, 2019, Quest terminated Grandison’s employment. The EEOC maintains that Grandison was denied a reasonable accommodation for her religious beliefs and fired by Quest because of her religion in violation of Title VII. In the litigation, Quest bears the burden of proving that accommodating Grandison’s religious beliefs would have imposed an undue hardship on the operation of its business.

The EEOC is the administrative agency of the United States charged by federal law with interpreting and enforcing federal employment and labor laws making religious discrimination an unlawful discriminatory employment practice. As part of its statutory mission to promote equal opportunity in the workplace and eradicate unlawful discriminatory employment practices, the EEOC brings lawsuits on behalf of employment discrimination victims, including employees discriminated on the basis of religion. In a press release issued by the EEOC on September, 2020 regarding the case, a trial attorney for the EEOC’s Dallas District Office, Meaghan Kuelbs, stated that “this dedicated employee was placed in the untenable position of being forced to choose between her religious beliefs and her job after 10 years of successful performance for the company.” “The EEOC is fully committed,” Ms. Kuelbs added, “to enforcing laws that protect employees in the workplace from discrimination on the basis of religion.”