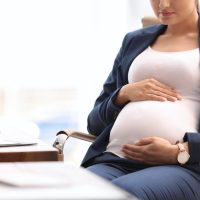 AVI owns and operates a restaurant in Wichita, Kansas. In December 2018, AVI hired Hoffman as a hostess. When Hoffman applied for the job with AVI, she was pregnant. AVI learned of Hoffman’s pregnancy when she began working for AVI on December 18, 2018. As her pregnancy progressed, Hoffman experienced pregnancy-related health issues, including foot swelling and back pain. In early January 2019, Hoffman asked the restaurant manager if she could use a stool as needed because of pregnancy-related swollen feet and back pain. The manager approved Hoffman’s request.

In late January 2019, a co-owner of AVI visited the restaurant and observed Hoffman’s use of the stool. The co-owner commented that Hoffman’s use of a stool at the hostess stand “didn’t look good.” After the co-owners comment, AVI no longer allowed Hoffman to use a stool as needed to alleviate her pregnancy-related swollen feet and back pain.

On February 1, 2019, Hoffman provided AVI with a doctor’s note requesting that AVI allow Hoffman “to have a stool at the hostess stand if possible due to swelling and back pain during pregnancy.” Upon receiving the doctor’s note, AVI still refused to allow Hoffman to use a stool. Instead, AVI terminated Hoffman’s employment.

In a press release issued on September 29, 2021, regarding the case, a regional attorney for the EEOC’s St. Louis District Office, Andrea G. Baran, explained that “in 1978, Congress passed the Pregnancy Discrimination Act to amend Title VII and clarify that unlawful sex discrimination includes discrimination based on pregnancy and related medical conditions.” “More than 40 years later,” Ms. Baran observed, “pregnant workers experience discrimination on the job far too often as they seek to provide for themselves and their growing families.”