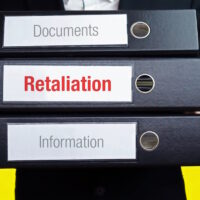 Having represented retaliation victims for more than twenty years, our Ocala, Florida retaliatory discharge attorneys know that employers often punish employees who complain about perceived discrimination in the workplace. As the U.S. Supreme Court observed in Crawford v. Metropolitan Gov. of Nashville & Davidson County, 555 U.S. 217 (2009), “fear of retaliation is the leading reason why people stay silent instead of voicing their concerns about bias and discrimination.” In this article, our Marion County, Florida retaliatory discharge lawyers explain how a recent retaliation lawsuit brought by the U.S. Equal Employment Opportunity Commission (EEOC) illustrates the broad protection afforded by the federal employment laws to employees who complain about perceived discrimination at work.

In a press release issued on March 31, 2021, the EEOC announced that it has filed a retaliatory discharge lawsuit against DBBH Holdings, Inc., operating as David’s Trash Service (DBBH). On March 31, 2021, the EEOC filed the retaliation lawsuit, U.S. Equal Employment Opportunity Commission v. DBBH Holdings, Inc., d/b/a David’s Trash Service, Case No. 4:21-cv-00037, in the U.S. District Court for the Eastern District of North Carolina. The EEOC has commenced the retaliatory discharge pursuant to Title VII of the Civil Rights Act of 1964 (Title VII) on behalf of a former employee of DBBH, Danielle Spruill (Spruill). Under Title VII, employers are prohibited from discriminating against employees on the basis of sex. In order to protect employment discrimination victims, Title VII also contains an anti-retaliation provision. Under Title VII, it is unlawful for employers to retaliate against employees who complain about perceived discrimination in the workplace, including perceived sex discrimination. The EEOC claims that DBBH violated Title VII by firing Spruill in retaliation for complaining about perceived sex discrimination in the workplace.

In May 2015, DBBH hired Spruill as a driver working out of its facility in Washington, North Carolina. Throughout her employment, Spruill was aware of offensive comments about her sex and sexual orientation made by the Shop Manager, including gender epithets. Spruill repeatedly complained about the Shop Manager’s conduct to the General Manager and Office Manager. However, according to the EEOC, the managers never took any corrective action and the sex-based and sexual orientation-based offensive comments by the Shop Manager continued unabated.

The EEOC, which is an administrative agency of the federal government and created by Title VII, is charged with interpreting and enforcing the federal labor laws making discrimination, harassment, and retaliation unlawful employment practices. In seeking to fulfill its statutory mission to protect and vindicate employee rights, the EEOC files lawsuits in federal court on behalf of retaliatory discharge victims. In a press release issued by the EEOC on March 31, 2021, regarding the case, a regional attorney for the EEOC’s Charlotte District Office, Melinda Dugas, stated that “employees have a legal right to work in an environment free from unlawful discriminatory conduct and harassment.” “Employees who believe they have been discriminated against or harassed,” Ms. Dugas explained, “have a right to raise those issues with their employer, and they have a right to do so without fear of losing their jobs or experiencing another form of retaliation.” “Employers who retaliate against employees who assert their legal rights,” Ms. Dugas added, “must be held accountable for their actions, and it is the EEOC’s responsibility to secure that accountability.”