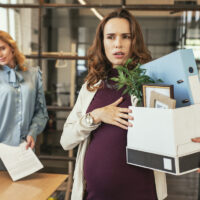 The EEOC brought the pregnancy discrimination lawsuit pursuant to Title VII of the Civil Rights Act of 1964, as amended by the Pregnancy Discrimination Act of 1978 (PDA), on behalf of a former employee of LCS, Tiffany Lewis (Lewis). The PDA prohibits employers from discriminating against women on the basis of pregnancy, childbirth, or related medical conditions. The PDA also mandates that employers treat women affected by a pregnancy, childbirth, or related medical conditions the same as non-pregnant employees who are similar in their ability or inability to work. When an employer uses an employee’s pregnancy as a negative factor in an employment decision, such as demotion, promotion, or discharge, the employer has discriminated against the employee on the basis of pregnancy in violation of the PDA. The EEOC claims that LCS violated the PDA by terminating the employment of Lewis because of her pregnancy.

Employee Fired Because Of Pregnancy

On September 16, 2013, Lewis spoke with a recruiter from HCM Staffing. The recruiter told Lewis that her assignment with LCS was ending as a result of LCS’s low call volume. While seeking more information regarding the reason for her termination, Lewis was told by another customer service representative at LCS that she had heard another LCS employee reading aloud from the computer of the LCS employee, a man named Gauvin, who ran the training class for attended by Lewis. What the LCS employee had read aloud from Gauvin’s computer, the customer service representative informed Lewis, was that LCS fired Lewis because of her pregnancy.

In a press release issued by the EEOC on May 10, 2021, regarding the case, a regional attorney for the EEOC’s Phoenix District Office, Mary Jo O’Neill, explained that “more than 40 years after the passage of the Pregnancy Discrimination Act, employers still discriminate against pregnant employees.” “Far too often,” Ms. O’Neill observed, “the EEOC sees employers explicitly referring to pregnancy when attempting to justify their decision to fire a pregnant employee or refusal to hire a pregnant employee.” “Employers must understand,” Ms. O’Neill added, “they cannot base their employment decisions on whether or not an employee or applicant is expecting.”