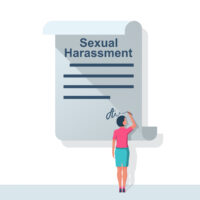 The EEOC brought the sexual harassment lawsuit pursuant to Title VII of the Civil Rights Act of 1964 (Title VII) on behalf of former female employees of Imperial Pacific. Title VII makes sexual harassment in the workplace an unlawful discriminatory employment practice. In order to violate Title VII, sexually harassing behavior must be sufficiently severe or pervasive to alter the conditions of the victim’s employment and create a hostile working environment. Employees are protected against sexual harassment from co-workers, supervisors, managers, clients, and customers.

As observed by the U.S. Court of Appeals for the District of Columbia in Curry v. District of Columbia, 195 F.3d 654 (D.C. Cir. 1999), “Title VII does not permit employers to stand idly by once they learn that sexual harassment has occurred.” Instead, as explained by the U.S. Ninth Circuit Court of Appeals in Fuller v. City of Oakland, Cal., 47 F.3d 1522 (9th Cir. 1995), “[o]nce an employer knows or should know of harassment, a remedial obligation kicks in.” “That obligation,” the Fuller  court explained, “will not be discharged until action—prompt, effective action—has been taken.” “If an employer is aware of the [ ] harassment and takes no remedial action or inadequate steps are taken to prevent recurrence of the harassment,” as determined by the Florida Fifth District Court of Appeals in Speedway Superamerica, LLC v. Dupont, 933 So.2d 75 (Fla. 5th DCA 2006), “then the employer can be held liable” under Title VII for creating or maintaining a sexually hostile work environment.”

The EEOC, which is an administrative agency of the federal government, is responsible for interpreting and enforcing the federal labor laws making discrimination, harassment, and retaliation unlawful employment practices. In order to preserve and enforce employee rights, the EEOC brings lawsuits against employers who have subjected their employees to unlawful discriminatory employment practices, including employers who have required their employees to work in a sexually hostile work environment.

In a press release issued by the EEOC on April 27, 2021 regarding the case, a regional attorney for the EEOC’s Los Angeles District Office, Anna Park, explained that “federal anti-harassment and retaliation protections extend to all workers in the Northern Mariana Islands.” In commenting on the case, the Director of the EEOC’s Honolulu Field Office, Raymond Griffin, Jr., observed that “unfortunately, sexual harassment and retaliation remain pervasive in today’s workplace.”