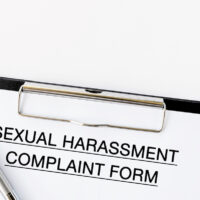 Shelley’s Tank is a septic tank cleaning company owned and operated by a man named Shelley (Shelley). In February 2017, Colon was hired by Shelley’s Tank as a truck driver. Throughout his employment, according to the EEOC, Colon was subjected to unwanted sexually harassing behavior by Shelley. Shelley’s unwelcome verbal conduct of a sexual nature towards Colon included sexual propositions, calling him pretty, and referring to him as pretty. Shelley’s unwelcome physical conduct of a sexual nature towards Colon included stroking his arms, blowing him kisses, and touching his buttocks.

Colon repeatedly objected to Shelley’s sexual behavior, telling Shelley “not to do that” to him and that he “better stop.” Despite Colon’s protests, Shelley’s harassment continued. On April 30, 2018, Shelley allegedly grabbed Colon’s buttocks. Because Shelley’s Tank did not have a sexual harassment policy or a human resources department, Colon made a complaint to the Orange County Sheriff’s Office on May 4, 2018 regarding the offensive sexual behavior. That same day, two sheriff’s deputies interviewed Shelley regarding the sexual harassment allegations. During the interview, Shelley repeatedly indicated that he planned to take action against whoever made the report. On May 8, 2018, Shelley fired Colon.

The EEOC is the administrative agency of the United States responsible for interpreting and enforcing federal employment laws prohibiting discrimination, harassment, and retaliation. In enforcing the federal employment laws, the EEOC is also authorized by federal law to bring lawsuits on behalf of victims of sexual harassment, including same-sex sexual harassment. In a press release issued by the EEOC on July 21, 2020 regarding the case, a regional attorney for the EEOC’s Miami, Florida District Office, Robert E. Weisberg, explained that “both men and women are protected from sexual harassment under Title VII” and that “sexual harassment will not be tolerated by the EEOC regardless of the sex of the victim or harasser.” In commenting on the case, the Director of the EEOC’s Tampa Field Office, Evangeline Hawthorne, stated that “protecting victims’ rights to oppose discrimination by reporting inappropriate conduct in the workplace is paramount to the EEOC’s mission.”