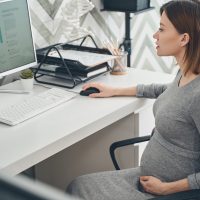 Under the PDA, employers are forbidden from discriminating against women on the basis of pregnancy, childbirth, or related medical conditions. The PDA’s prohibition against pregnancy discrimination applies to all aspects of employment, including hiring, compensation, job assignment, promotion, leave, discipline, and discharge. Under the PDA, as determined by the U.S. Supreme Court in UAW v. Johnson Controls, 499 U.S. 187 (1991), the “decision to work while [ ] being pregnant . . . is reserved for each individual women to make for herself” and “pregnant women who are able to work must be permitted to work under the same conditions as other employees.” In guaranteeing pregnant employees the right not to be discriminated against on the basis of pregnancy and the right to work while pregnant, the PDA provides pregnant employees with job security.

Presidente operates a chain of grocery stores in Florida. In January 2018, Tirado began working for Presidente. On February 26, 2018, Tirado learned that she was pregnant. That same day, Tirado informed a co-worker, Tejera, that she was pregnant. Tejera then notified a manager, Curbelo, of Tirado’s pregnancy. Curbelo, according to the EEOC, responded by saying that Tirado would not be able to work at Presidente anymore because she was pregnant. On February 28, 2018 Curbelo notified Tirado that her employment was terminated. When Tirado asked why she was being fired, Curbelo responded something along the lines of “we just don’t need you anymore.”

Sometime after Tirado was fired and no longer pregnant, Presidente employees reached out to her through her husband and urged her to re-apply at Presidente. On August 3, 2018, Tirado returned to the Presidente grocery store to discuss her possible re-employment. During the interview process, Tirado spoke with Curbelo and asked Curbelo why she was fired because she was pregnant. Curbelo responded something along the lines of, “if you know why you were fired, then why are you asking me.” Curbelo concluded the conversation by informing Tirado that she could not return to work at Presidente.

In a press release issued on September 23, 2021 regarding the case, a regional attorney for the EEOC’s Miami District Office, Robert Weisberg, explained that “female employees should not be forced to work with the fear of losing their jobs.” In commenting on the case, the Director of the EEOC’s Miami District Office, Paul Valenti, observed that “a pregnant worker is often in special need of the job security afforded by the PDA to be able to continue earning money for her growing family.” “It is important,” Mr. Valenti added, “that employers understand that they cannot fire a woman simply because she is pregnant and will need maternity leave.”