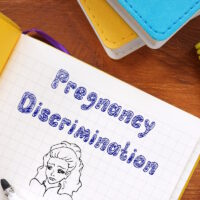 Candidate Not Hired Because Pregnant

Harlan is a construction company based in Missouri. In May 2019, Beck applied for a receptionist position at Harlan through a staffing agency, Westport One Recruiting (Westport One). Beck, according to the EEOC, was qualified for the position. At the time she applied for the job, Beck was pregnant.

On June 6, 2019, the day after learning that Beck was pregnant, Harlan revoked Beck’s job offer because she was pregnant. Harlan’s office manager expressed concern that Beck would miss work due to her pregnancy and would have to be retrained. After revoking Beck’s job offer, Harlan then hired an individual who was not pregnant for the receptionist position. The EEOC claims that Harlan violated Title VII, as amended by the PDA, by refusing to hire Beck because she was pregnant.

The EEOC is the administrative agency of the United States responsible for interpreting and enforcing federal employment laws making the failure or refusal to hire pregnant job applicants an unlawful employment practice. In order to correct unlawful employment practices, the EEOC is authorized by federal law to bring lawsuits on behalf of pregnancy discrimination victims. In a press release issued by the EEOC on September 30 2020 regarding the case, a regional attorney for the EEOC’s St. Louis District Office, Andrea G. Baran, observed “hiring discrimination is one of the most difficult types of employment discrimination to eliminate because applicants usually do not know the reason they were not selected for hire.” “But here a person involved in the hiring process,” Ms. Baran explained, “had the courage to step forward and tell the truth about why the worker’s job offer was revoked.” Ms. Baran added that “justice depends on the voices of good people who are willing to stand up for what is right.”