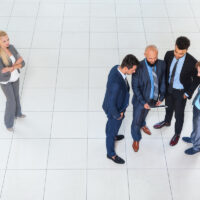 In a press release issued on February 3, 2021, the U.S. Equal Employment Opportunity Commission (EEOC) announced that it has entered into a Consent Decree to settle a sex-based pay discrimination lawsuit against Aimbridge Hospitality, LLC and AH 2007 Management, LP (collectively, Aimbridge). On July 16, 2019, the EEOC filed the disability discrimination lawsuit, U.S. Equal Employment Opportunity Commission v. Aimbridge Hospitality, LLC and AH 2007 Management, LP Case No. 19-cv-914, in the U.S. District Court for the Western District of Louisiana. Before filing the sex-based pay discrimination lawsuit, the EEOC initially endeavored attempted to correct the alleged discriminatory employment practices through its statutorily mandated conciliation process. Unable to reach an acceptable settlement through conciliation efforts, the EEOC moved forward with attempting to remedy the alleged discriminatory employment practices through litigation.

In the Consent Decree, which was signed by U.S. District Court Judge Terry A. Doughty on February 2, 2021, Aimbridge agreed to pay $400,000 to resolve the sex-based pay discrimination lawsuit. In this article, our Sumter County, Florida employment discrimination lawyers explain the EEOC’s allegations of unlawful discriminatory employment practices against Aimbridge.

The EEOC filed the sex-based pay discrimination lawsuit pursuant to Title VII of the Civil Rights Act of 1964 (Title VII) on behalf of an employee of Aimbridge, Q’juanisha Benson (Benson), and other female employees. Title VII makes discrimination on the basis of sex an unlawful discriminatory employment practice. Tile VII forbids discrimination on the basis of sex with respect to all aspects of employment, including hiring, compensation, promotion, and discharge. To establish a case of sex-based pay discrimination, an employee must show, in material part, that she performs a job that is similar to that of a higher paid employee of the opposite sex. In assessing the similarity of jobs, courts focus on whether the jobs involve similar duties, require similar skills, effort, and responsibility, and involve similar working conditions. The EEOC alleges that Aimbridge violated Title VII by paying Benson and other female workers less than a male employee for similar work.

On August 4, 2017, Benson was hired by Aimbridge as a front desk supervisor at the hotel. In this position, Benson supervised, trained, and coached guest service representatives, including Vicknair. From August 4, 2017 until March 28, 2018, Benson’s pay rate was never more than $11.00 per hour. In September 2017 and March 2018, Benson lodged complaints of sex-based pay discrimination with a member of Aimbridge’s management. On April 1, 2018, Aimbridge increased Benson’s pay rate to $16.00 per hour. On June 22, 2018, Aimbridge decreased Vicknair’s pay rate to $9.50 per hour. Aimbridge, however, did not increase the pay rates of the other female employees holding the position of guest service representative.

The EEOC, which is an administrative agency of the federal government, is responsible for interpreting and enforcing the federal anti-discrimination laws, including Title VII. In seeking to promote equal pay for equal work in the American workplace, the EEOC brings lawsuits on behalf of employment discrimination victims, including victims of sex-based pay discrimination. In a press release issued by the EEOC on February 3, 2021 regarding the case, a regional attorney for the EEOC’s Houston District Office, Rudy Sustaita, explained that “employers must prevent sex-based pay disparities.” “When such inequities do occur,” Mr. Sustaita added, “employers need to correct them immediately by increasing the pay of the lower-paid employee.” In commenting on the case, a trial attorney for the EEOC’s New Orleans Field Office, Andrew Kingsley, stated that “if there is a pay disparity, an employer must have a good reason—and gender is never a good reason—for that difference.”