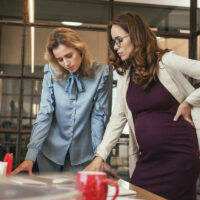 The EEOC brought the pregnancy discrimination lawsuit pursuant to Title VII of the Civil Rights Act of 1964, as amended by the Pregnancy Discrimination Act of 1978 (PDA), on behalf of a former employee of Cantina Royale, Miccol DeGracia (DeGracia). The PDA protects women from discrimination on the basis of pregnancy, childbirth, or related medical conditions. The PDA protects women from pregnancy discrimination in all aspects of employment, including compensation, promotion, work assignments, discipline, layoff, and discharge. The EEOC claims that Cantina Royale violated the PDA by firing DeGracia because of her pregnancy.

In April 2018, Cantina Royale hired DeGracia to work as a server at its restaurant in New York City. In May 2018, Cantina Royale learned that DeGracia was pregnant after she experienced a pregnancy-related medical emergency at work that required her to go to the hospital. On June 29, 2018, DeGracia was working outdoors in the heat and had to sit down due to feeling like she would faint. The General Manager initially refused to allow her to leave work. Ultimately, the General Manager told DeGracia that she had to leave work because she was pregnant.

On July 1, 2018, DeGracia emailed the General Manager to ask for time off from work for an “urgent” doctor’s appointment because she was “feeling worse.” When DeGracia returned to work on July 4, 2018, she was informed that her employment was terminated. Cantina Royale, according to the EEOC, refused to tell DeGracia the reason for her termination other than she was no longer “a good fit.”

The EEOC, which is an administrative agency of the federal government, is responsible for interpreting and enforcing the federal labor laws making discrimination, harassment, and retaliation unlawful employment practices. In seeking to fulfill its statutory mission of eradicating employment discrimination, the EEOC brings lawsuits in federal court on behalf of employees subjected to unlawful discriminatory employment practices, including unlawful pregnancy discrimination. In a press release issued by the EEOC on March 24, 2021, regarding the case, a regional attorney for the EEOC’s New York District Office, Jeffrey Burstein, explained that “federal law protects the job security of pregnant employees.” “Employers must allow a pregnant employee to continue working,” Mr. Burstein added, “as long as she is willing and able to work.”