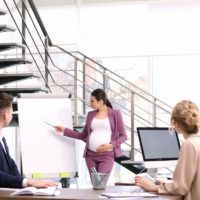 The EEOC brought the pregnancy discrimination lawsuit pursuant to the Pregnancy Discrimination Act of 1978 (PDA) on behalf of a former employee of Maurizio Trattoria, Elena Boni (Boni). The PDA protects employees from discrimination on the basis of pregnancy, childbirth, or related medical conditions. Under the PDA, employers must also treat women affected by pregnancy, childbirth, or related medical conditions the same as non-pregnant employees, whether male or female, who are similar in their ability or inability to work. The EEOC claims that Maurizio Trattoria violated the PDA by firing Boni on the basis of her pregnancy. In this article, our Alachua County, Florida employees’ rights lawyers explain the EEOC’s allegations against Maurizio Trattoria.

The pregnancy-based discriminatory treatment, according to the EEOC, included reducing Boni’s hours after she came back to work from medial leave due to pregnancy-related complications until she left on pregnancy leave. Although Maurizio Trattoria reduced Boni’s hours, the company did not reduce the hours of non-pregnant employees. Maurizio Trattoria also refused to return Boni to her server position after she look leave for the birth of her child. Instead, Maurizio Trattoria fired Boni in the summer of 2015, while the restaurant continued the employment of servers with less seniority. The EEOC contends that Maurizio Trattoria’s pregnancy-based discriminatory animus for Boni’s reduction in hours and termination was evidenced by the owner’s comments that Boni should stay home since she was pregnant, that her pregnancy caused coverage problems, and that he would offer her a position with less pay for more work so that she would not come back from her pregnancy leave.

The EEOC is the administrative agency of the United States responsible for interpreting and enforcing federal laws forbidding employment discrimination, including discrimination on the basis of pregnancy, childbirth, or related medical conditions. In enforcing the federal anti-discrimination laws, the EEOC is also authorized by federal law to bring lawsuits on behalf of employees who have been fired because of their pregnancy in violation of the PDA. In a press release issued by the EEOC on January 7, 2020 regarding the case, a regional attorney for the EEOC’s San Diego Local Office, Christopher Green, stated that “women should not be penalized for having children.” “The EEOC takes pregnancy discrimination seriously,” Mr. Green added, “and will vigorously protect the rights of pregnant employees.”

Based in Ocala, Florida and representing employees throughout Central Florida, our Alachua County, Florida employees’ rights attorneys have been representing employment discrimination victims for more than twenty years. If you have been discriminated against on the basis of pregnancy or have questions about your protection against pregnancy discrimination, please contact our office for a free consultation with our Gainesville, Florida employees’ rights lawyers. Our labor law attorneys take employment discrimination cases on a contingency fee basis. This means that there are no attorney’s fees incurred unless there is a recovery and our attorney’s fees come solely from the monetary award that you recover.