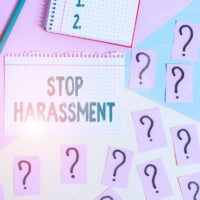 The EEOC has brought the race harassment lawsuit pursuant to Title VII of the Civil Rights Act of 1964 (Title VII) on behalf of an employee of Smashburger.  In the lawsuit, the EEOC refers to the employee as the “Aggrieved Individual.”  Under Title VII, employees are protected from discrimination with respect to the compensation, terms, conditions, or privileges of employment on the basis of race.  Race harassment is a form of race discrimination forbidden by Title VII.  Racial harassment which is sufficiently severe or pervasive to alter the conditions of the victim’s employment and create an abusive work environment violates Title VII.  The EEOC claims that Smashburger violated Title VII by allowing its employee to be subjected to hostile work environment racial harassment.  In this article, our Citrus County, Florida race harassment lawyers explain the EEOC’s allegations against Smashburger.

Workplace Must Be Free Of Race Harassment

The EEOC is the administrative agency of the United States responsible for interpreting and enforcing federal laws prohibiting employment discrimination, harassment, and retaliation. In enforcing the federal civil rights laws, the EEOC is also authorized by federal law to bring lawsuits on behalf of employees who have endured racial abuse in the workplace. In a press release issued by the EEOC on March 30, 2020 regarding the case, a regional attorney for the EEOC’s New York District Office, Jeffrey Burstein, explained that “employees have a right to work in an environment free of racial harassment.” “Racial harassment is against the law,” Mr. Burstein added, “and when employers learn about it, they have an obligation not just to act, but to act promptly and effectively.” In commenting on the case, the Acting Director of the EEOC’s New York District Office, Judy Keenan, observed that “the law is clear that employers have a responsibility to ensure their workplaces are free from unlawful harassment, which includes making sure that all levels of management know how to promptly and appropriately address problematic conduct when it is reported.”

Based in Ocala, Florida and representing employees throughout Central Florida, our Citrus County, Florida race harassment attorneys have dedicated their practice to fighting against employers who have required employees to work in a racially hostile work environment. If you have been subjected to racially derogatory language in the workplace or have questions about your protection against racial harassment under the federal anti-discrimination laws, please contact our office for a free consultation with our Inverness, Florida race harassment lawyers. Our employee rights law firm takes race harassment cases on a contingency fee basis. This means that there are no attorney’s fees incurred unless there is a recovery and our attorney’s fees come solely from the monetary award that you recover.