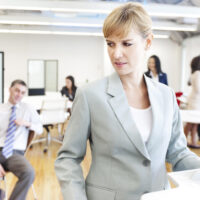 The EEOC filed the sexual harassment lawsuit under Title VII of the Civil Rights Act of 1964 (Title VII), on behalf of former employees of KMG, Sarah Perez (Perez) and Brenna McCauley (McCauley). Under Title VII, sexually harassing behavior that is sufficiently severe or pervasive to alter the conditions of the victim’s employment and create a hostile work environment is an unlawful discriminatory employment practice. In order to protect sexual harassment victims, Title VII contains an anti-retaliation provision. Title VII makes it unlawful for an employer to retaliate against employees who complain about perceived sexual harassment. Title VII’s anti-retaliation provision also protects employees from retaliation when they refuse to submit to a supervisor’s sexual demands or requests for sexual favors.

The EEOC claims that KMG violated Title VII by requiring Perez and McCauley to work in a sexually hostile work environment. The EEOC further alleges that KMG violated Title VII by constructively discharging Perez and McCauley because they were compelled to involuntarily resign their employment in order to escape the sexually hostile work environment.

Because KMG did not have a complaint procedure for reporting sexual harassment, Perez was forced to complain to IHOP’s corporate office using a general customer number she found online. In May 2017, IHOP’s corporate office referred Perez’s complaint to KMG. KMG, according to the EEOC, took no corrective action against the General Manager in response to Perez’s complaint. The EEOC maintains that because Perez was forced to involuntarily resign her employment because of the General Manager’s continuous sexual harassment, KMG constructively discharged Perez in violation of Title VII.

McCauley was seventeen years old when she was hired by KMG in April 2017. Beginning shortly after her hire, and continuing throughout her employment, McCauley was also subjected to unwelcome verbal and physical conduct of a sexual nature by the General Manager. The General Manager’s sexually harassing behavior towards McCauley included comments about her body, remarks about her clothing, brushing up against her, questions about her sex life, exposing his penis, placing her hand on his crotch, requests to see her breasts, and showing her pornographic videos. The General Manager’s sexual behavior also included telling McCauley that she would not be allowed to work the more desirable morning shifts unless she had sex with him. When McCauley refused, the General Manager said he had to keep her “on punishment” by keeping her on evening and overnight shifts.

McCauley, according to the EEOC, complained to the Assistant Manager about the sexual harassment she endured, but no corrective action was taken. Just like Perez, McCauley also resigned her employment in order to escape the sexually hostile work environment. In compelling McCauley to involuntarily quit because of the General Manager’s relentless sexual harassment, the EEOC contends that KMG constructively discharged McCauley in violation of Title VII.

The EEOC, which is an administrative agency of the federal government, is responsible for interpreting and enforcing the federal employment laws prohibiting discrimination, harassment, and retaliation. In protecting employees from hostile work environment sexual harassment, the EEOC files lawsuits on behalf of sexual harassment victims.

In a press release issued by the EEOC on March 16, 2021 regarding the case, a regional attorney for the EEOC’s Philadelphia District Office, Debra Lawrence, stated that “unfortunately, sexual harassment remains a serious problem in the restaurant industry.” “The EEOC is committed to protecting all workers,” Ms. Lawrence added, “from sexual harassment if an employer fails to do so.” In commenting on the case, the Director of the EEOC’s Philadelphia District Office, Jamie R. Williamson, explained that “all workers have the right to earn a living without being subjected to unwelcome sexual advances, assaults, or comments.” “Sexual harassment,” Mr. Williamson observed, “is especially pernicious when a manager harasses teen workers.”