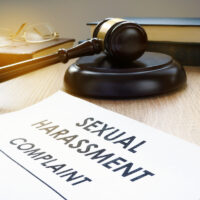 On March 31, 2020, the U.S. Equal Employment Opportunity Commission (EEOC) issued a press release announcing that it has entered into a Consent Decree to settle a same-sex sexual harassment and retaliation lawsuit against Bay Country Professional Concrete, LLC (Bay Country). On September 27, 2019, the EEOC filed the case, EEOC v. Bay Country Professional Concrete, LLC, Case No. 1:19-cv-02848, in the U.S. District Court for the District of Maryland after initially seeking to obtain a pre-litigation resolution of the case through its lawfully required conciliation process. In the Consent Decree, which was signed by U.S. District Judge Ellen L. Hollander on March 26, 2020, Bay Country agreed to pay $30,000 to resolve the same-sex sexual harassment and retaliation lawsuit.

In March 2015, Fuller began working for Bay Country as a concrete finisher. Beginning in May 2015, according to the EEOC, Fuller was subjected to sexually harassing behavior by two male employees. The same-sex sexual harassment towards Fuller by the male co-workers included sexual advances, sexual touching, making hand gestures simulating oral sex, and calling him a “whore” and a “hot little mama.” The abusive behavior also included threatening Fuller with physical harm. In May 2017, Fuller complained to Bay Country’s owner about the unwanted sexual behavior. Despite Fuller’s complaint, the owner “did not take corrective action.” As a result, Fuller’s sexual hostile work environment continued.

On December 13, 2017, one of the male co-workers groped Fuller’s chest and behind, and the other male co-worker intentionally poked Fuller’s behind with a shovel handle. That same day, Fuller made a police report regarding the unwanted touching from the male co-employees. That same day, Bay Country fired Fuller because he called the police. The EEOC claims that Bay Country unlawfully fired Fuller in retaliating for complaining about sexual harassment and for opposing discriminatory employment practices.

The EEOC is the administrative agency of the United States responsible for interpreting and enforcing federal employment laws prohibiting discrimination, harassment, and retaliation. In enforcing the federal civil rights laws, the EEOC is also permitted by federal law to file lawsuits on behalf of same-sex sexual harassment and retaliation victims. In a press release issued by the EEOC on March 31, 2020 regarding the case, the Director for the EEOC’s Philadelphia District Office, Jamie R. Williamson, explained that “when an employee bravely comes forward to report workplace harassment, employers should take swift action to end the unlawful conduct.” In further commenting on the case, Mr. Williamson stated that “retaliation only compounds the problem.”