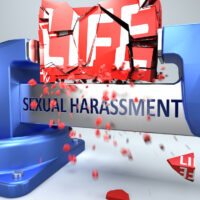 In a press release issued on April 27, 2020, the U.S. Equal Employment Opportunity Commission (EEOC) announced that it has entered into a Consent Decree to settle a sexual harassment lawsuit against HM Solutions, Inc. (HM Solutions). In 2019, the EEOC filed the lawsuit, U.S. Equal Employment Opportunity Commission v. HM Solutions, Inc., Case No. 4:19-cv-02043, in the U.S. District Court for the District of South Carolina after initially trying to resolve the case without the necessity of litigation through its lawfully mandated conciliation process. In the Consent Decree, which was filed with the District Court on April 27, 2020, HM Solutions agreed to pay $315,000 to resolve the sexual harassment lawsuit.

The EEOC brought the sexual harassment and lawsuit pursuant to Title VII of the Civil Rights Act of 1964 (Title VII) on behalf of four former female employees of HM Solutions. Title VII protects employees from sexual harassment which is sufficiently severe or pervasive to alter the conditions of the victim’s employment and create a hostile or abusive work environment. In this article, our Citrus County, Florida sexual harassment victims’ lawyers explain the EEOC’s allegations against HM Solutions.

HM Solutions, which is based on Greenville, South Carolina, provides commercial and industrial janitorial services. The four women were employed by HM Solutions and assigned to work at a client’s battery recycling facility in Florence, South Carolina where they performed general housekeeping duties. While working at the Florence facility, according to the EEOC, the four female workers were subjected to a sustained campaign of sexual advances, verbal conduct of a sexual nature, and physical conduct of a sexual nature by a shift supervisor and account manager employed by HM Solutions. The EEOC claims that the sexually harassing behavior was sufficiently severe or pervasive to alter the conditions of the victims’ employment and create a sexually hostile work environment.

Victims Subjected To Demands For Sex

One sexual harassment victim, Tarrell Hudson (Hudson), was subjected to sexual remarks on a daily basis by the shift supervisor and account manager, including remarks about performing oral sex on or having sex with Hudson. On one occasion, the shift supervisor chased Hudson around her car in the parking lot of the Florence facility, while repeatedly saying that he wanted to perform oral sex on Hudson. On another occasion, the account manager forcibly kissed Hudson. The EEOC claims that Hudson was ultimately terminated for refusing to submit to the sexual behavior and sexual demands.

Another sexual harassment victim, Tiffany Moultrie (Moultrie), was also subjected to sexually offensive behavior on a daily basis by the shift supervisor and account manager. The unwanted sexually harassing behavior towards Moultrie included comments about having sex with her, remarks about their sex life, remarks about her physical appearance, touching her thigh, and soliciting her to participate in group sex. The EEOC contends that Moultrie was fired because she rejected the sexual demands of the shift supervisor and account manager.

The third sexual harassment victim, Shermiah Townsend (Townsend), was subjected to a continuous barrage of sexually harassing behavior by the shift supervisor and account manager. The sexually charged behavior towards Townsend included remarks about her physical appearance, sexual propositions, and offering job protection and overtime work in exchange for sexual favors. On several occasions, the shift supervisor asked Townsend to perform oral sex on him as he exposed his penis. Because she refused to acquiesce to the sexual harassment, according to the EEOC, HR Solutions terminated Townsend’s employment.

The final sexual harassment victim, Sharon Cooper (Cooper), also endured a relentless barrage of sexually harassing behavior from the shift supervisor and account manager. The shift supervisor made sexualized comments, solicited the performance of oral sex, grabbed Cooper’s genitals, and grabbed Cooper’s behind. On at least two occasions, the account manager offered Cooper a promotion in exchange for sex. The hostile work environment harassment culminated in Cooper’s termination, the EEOC maintains, because of her refusal to perform sexual acts in exchange for employment benefits.

The EEOC is the administrative agency of the United States charged with interpreting and enforcing federal employment laws prohibiting hostile work environment sexual harassment. In enforcing the federal employment laws, the EEOC is also permitted by federal law to file lawsuits on behalf of sexual harassment victims. In a press release issued by the EEOC on April 27, 2020 regarding the case, a regional attorney for the EEOC’s Charlotte District Office, Kara G. Harden, stated that “we commend the efforts of HM Solutions in reaching a resolution with the EEOC that provides both meaningful monetary relief and important equitable relief.”