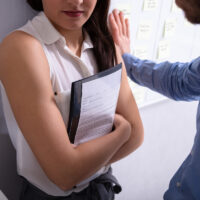 In March 2018, Smith began working for Modern Polymers through a temporary employment agency as a Quality Technician at its facility in Cherryville, North Carolina. On June 6, 2018, Modern Polymers hired Smith full-time. Beginning in mid-June 2018, according to the EEOC, a Production Supervisor began subjecting Smith to a sustained campaign of sexually harassing behavior. The Production Supervisor’s alleged sexual harassment towards Smith included touching her thighs and buttocks, making remarks about her breasts and buttocks, asking what type of underwear she was wearing, making comments about using sex toys on her, and leaving gifts for her, including flowers, candy, underwear, and sex toys. The Production Supervisor’s harassment, the EEOC claims, occurred on a nearly daily basis.

The EEOC is the administrative agency of the United States with the obligation under federal law for interpreting and enforcing the federal employment laws prohibiting discrimination, harassment, and retaliation. In order to preserve and protect the rights of employees, the EEOC files lawsuits against employers who have required their employees to work in a sexually hostile work environment in violation of Title VII.

In a press release issued by the EEOC on May 13, 2021 regarding the case, a regional attorney for the EEOC’s Charlotte District Office, Melinda C. Dugas, explained that “it has been decades since the U.S. Supreme Court recognized that sexual harassment in the workplace is a form of a sex discrimination prohibited by Title VII, yet sexual harassment continues to be prevalent throughout many industries.” “Employers have an obligation,” Ms. Dugas observed, “to protect their employees from all unlawful harassment, including that based on sex.” “When they refuse to do so,” Ms. Dugas added, “it is the EEOC’s responsibility to intercede and enforce those laws.”