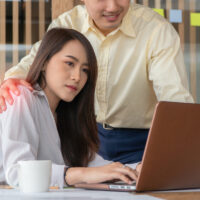 On June 5, 2017, McDuffie began working for Locos Grill as a cook. Almost immediately after her employment began, a male cook started sexually harassing McDuffie. On June 12, 2017, McDuffie reported the sexual harassment to a supervisor. Locos Grill, according to the EEOC, took no action in response to McDuffie’s complaint. On July 14, 2017, the harasser approached McDuffie from behind, pressed his pelvis and penis against McDuffie’s buttocks, and gyrated his hips against her buttocks while she cooked. On July 22, 2017, the harasser followed McDuffie to the restroom while she was cleaning and asked if she wanted him to join her in the restroom to show her what he was “working with.” On July 29, 2017, the harasser against approached McDuffie from behind while she was cooking. McDuffie loudly told the harasser to stop in front of the restaurant’s manager.

Ultimately, McDuffie and the Human Resources representative agreed that McDuffie and the harasser would no longer work the same shift and that Locos Grill would counsel the harasser regarding his inappropriate behavior. Locos Grill then sent McDuffie home and did not allow her to complete the remainder of her shift. Locos Grill, according to the EEOC, never implemented the agreed-upon remedy. Instead, Locos Grill never again scheduled McDuffie to work. From September 15, 2017 and September 20, 2017, McDuffie repeatedly contacted Human Resources and the restaurant’s manager regarding returning to work, but she was ignored.

The EEOC is the administrative agency of the United States charged with interpreting and enforcing federal employment laws prohibiting discrimination, harassment, and retaliation. In enforcing the federal anti-discrimination laws, the EEOC is also authorized by federal law to file lawsuits on behalf of sexual harassment and retaliation victims. In a press release issued by the EEOC on April 22, 2020 regarding the case, the Director for the EEOC’s Atlanta District Office, Darrell Graham, stated that “employees should not have to face sexual harassment from co-workers, and we at the EEOC will continue to vigorously enforce the federally protected rights of employees to speak out against this kind of abuse in the workplace without fear of retaliation.”