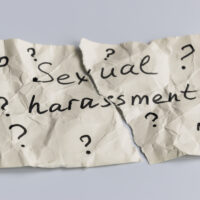 The EEOC brought the sexual harassment case pursuant to Title VII of the Civil Rights Act of 1964 (Title VII) on behalf of a former employee of Hunter Auto, Sharon McInnis (McInnis). Under Title VII, employees are protected from sexual harassment which is sufficiently severe or pervasive to alter the conditions of the victim’s employment and create a hostile or abusive work environment. The EEOC claims that Hunter Auto violated Title VII by allowing McInnis to be subjected to a sexually hostile work environment. In this article, our Marion County, Florida sexual hostile work environment lawyers explain the EEOC’s allegations against Hunter Auto.

Hunter Auto is a towing business in Charlotte, North Carolina. In February 2018, McInnis began working in the office at Hunter Auto’s facility. Starting in March 2018, according to the EEOC, McInnis’ male co-workers began subjecting her an almost daily barrage of unwanted sexually harassing behavior. One male co-employee repeatedly solicited McInnis for sex, stating that he would have to take the afternoon off to go to her apartment and have sex. This same male co-worker also made comments to other employees suggesting that he was in a consensual relationship with McInnis. On one occasion, when the male co-worker saw McInnis speaking with another male outside the office, the male co-worker told McInnis not to talk to the other male because she, McInnis, belonged to him.

The EEOC also claims that other male co-employees made sexually offensive comments to or in the presence of McInnis, including remarks implying that they had previously had sex with McInnis. The sexual comments included remarks about having been in McInnis’ bed, having a “good time” together “last night,” telling McInnis she looked “sexy,” and asking McInnis what her boyfriend did to make her happy. On one occasion, a male co-employee attempted to rub McInnis’ shoulders, stating that McInnis was tense and that he and McInnis would need to “work on this tonight.”

The EEOC alleges that Hunter Auto failed to take effective corrective action to protect McInnis from the unwanted sexually harassing behavior. In May 2018 and June 2018, according to the EEOC, McInnis complained to the Operations Manager and Vice President about the sexually abusive behavior in the workplace. The EEOC claims that when McInnis complained about the sexual harassment, management told McInnis to “let it go” and “ignore it.” The EEOC also Hunter Auto’s management tried to justify its failure to protect McInnis from the sexually hostile work environment by stating that “was just the way some of [Hunter Auto’s] employees were.”

Beginning in June 2018 and continuing through the end of her employment in August 2018, McInnis became physically ill almost every time she commuted to work. In August 2018, McInnis told the Operations Manager that the work environment was negatively impacting her health. The Operations Manager told McInnis that if the job had a negative impact on her health, then she should resign. On August 28, 2018, McInnis sent an email to the Operations Manager informing Hunter Auto that she was resigning because she could no longer tolerate the sexually hostile work environment. The EEOC claims that by failing to take effective remedial action to prevent the sexual harassment from continuing and thereby forcing McInnis to resign in order to escape the sexual hostile work environment, Hunter Auto constructively discharged McInnis in violation of Title VII.

The EEOC is the administrative agency of the United States responsible for interpreting and enforcing federal laws prohibiting employment discrimination, including sexual harassment. In enforcing the federal anti-discrimination laws, the EEOC is also authorized by federal law to bring lawsuits on behalf of employees who have been required to work in a sexual hostile work environment. In a press release issued by the EEOC on April 3, 2020 regarding the case, a regional attorney for the EEOC’s Charlotte District Office, Kara Haden, explained that “employers have an obligation to eliminate workplace sexual harassment and take every complaint seriously.” “Effective reporting procedures and a willingness to address sexually inappropriate conduct are necessary,” Ms. Haden added, “to create a workplace free of discrimination.”