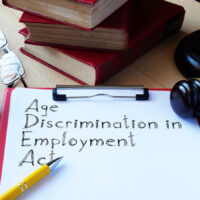 Having litigated employment discrimination claims in Florida for more than two decades, our Citrus County, Florida workplace discrimination lawyers are always pleasantly surprised when the United States Supreme Court expands protections for workers, however small they may seem, especially when the decision turns on a “textualist” approach to the law. The Age Discrimination in Employment Act of 1967 (ADEA) prohibits covered employers from taking adverse employment actions against workers based on their age (over 40) or otherwise engaging in or facilitating age-based discrimination in the workplace. Curiously, the sections of the law that pertain to public sector employees and private sector employees include slightly different language. The Supreme Court was recently called upon to decide whether that difference in language in fact establishes a different standard for public sector and private sector employees to prove age discrimination occurred. In the case of Babb v. Wilkie, 140 S. Ct. 1168 (2020), the Court found that the different language does, indeed, give more protection to public sector employees than does the prevailing standard for private employees in proving discrimination.

Babb concerns a clinical pharmacist who works at the U. S. Department of Veterans Affairs Medical Center. The employee, who was born in 1960, was subject to several adverse employment decisions, including having training opportunities denied, being passed over for a promotion, and having her holiday pay docked. The employee sued the Secretary of Veterans Affairs (the VA) claiming that these decisions were based on age.

The VA filed for summary judgment, offering nondiscriminatory reasons for the firing. The trial court granted the motion and dismissed the claims, finding that the VA had proffered legitimate reasons for the challenged actions and that no jury could reasonably conclude that those reasons were pretextual. The plaintiff appealed, claiming that the standard used was inappropriate for “mixed-motive” claims, given that the VA never had to deny that age was a factor whatsoever. Instead, the VA merely had to deny that age was the “but-for” factor in the adverse personnel decisions.

Instead, the plaintiff argued that an adverse personnel decision is unlawful if age is ever a factor. Because circuit courts were split on the proper standard for age discrimination claims, the Supreme Court took up the case.

The Supreme Court’s opinion turned on the specific language used in the sections of the ADEA pertaining to public sector and private sector employees. The specific language in the section pertaining to public sector employees states that “personnel actions” affecting individuals aged 40 and older must be made “free from any discrimination based on age.” The government argued that the prevailing standard for employment discrimination asks whether the discriminatory factor was a “but-for” cause in the adverse personnel decision–meaning that the claim fails unless the employment decision would not have been made but for consideration of illegal factors such as age.

The Supreme Court disagreed. While the section of the law pertaining to private-sector employees may allow for a “but-for” standard, the language in the section pertaining to public sector employees clearly states that personnel actions must be “free from any discrimination based on age.” The language alone leaves no wiggle room: The employment decision must be “untainted” by age considerations. Age must not be a factor in the decision whatsoever. Therefore, it is not sufficient for the VA to offer some legitimate reason for the adverse employment decision. Instead, the VA should have had to demonstrate that the personnel decision had nothing to do with age.

The decision potentially expands the universe of age discrimination claims available to federal employees, granting them protections to which they are clearly entitled under the law. Employment discrimination should always be illegal, regardless of whether an improper category such as age or race was a “minor factor” in a decision or whether it was the primary consideration.