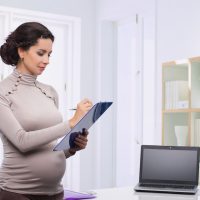 On September 10, 2021, the EEOC issued a press release announcing that it has filed a pregnancy discrimination lawsuit against Bourne’s House, LLC (Bourne’s House). On September 8, 2021, the EEOC filed the pregnancy discrimination lawsuit, U.S. E.E.O.C. v. Bourne’s House, LLC, Case No. 21-cv-01665, in the U.S. District Court for the Eastern District of Louisiana after first attempting to resolve the alleged unlawful employment discriminatory practices through its conciliation program.

The EEOC has brought the pregnancy discrimination lawsuit under Title VII of the Civil Rights Act of 1964, as amended by the Pregnancy Discrimination Act of 1978 (PDA), on behalf of an individual who applied for employment with Bourne’s House, a woman named Gerald. The EEOC claims that Bourne’s House violated the PDA by terminating and then refusing to rehire Gerald because she was pregnant.

Because she did not see the Facebook message, Gerald reported to work on April 19, 2019. The manager asked Gerald whether she had seen her Facebook message, and Gerald stated that she had not. The manager told Gerald that the position was not suitable for her because she was pregnant. The manager then discharged Gerald and told Gerald that she could re-apply after giving birth. While still pregnant on August 23, 2019, Gerald applied in person for a position at Bourne’s House. Someone at the restaurant, but not Gerald, added the word “pregnant” to Gerald’s application after Gerald had submitted the application. Bourne’s House did not rehire Gerald.

In a press release issued on September 10, 2021 regarding the case, the Director of the EEOC’s New Orleans Field Office, Malcolm Medley, explained that “it is unlawful for an employer to fire an employee simply because she is pregnant.” In commenting on the case, the Director of the EEOC’s Houston District Ofice, Rudy Sustaita, observed that “pregnant workers are entitled to the same opportunities as all other workers.”