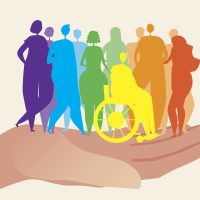 PR is a staffing company with offices throughout the United States. PR is a wholly-owned subsidiary of TrueBlue. In February 2018, PR hired Jaime to work at its office in Virginia as a Market Recruiting Coordinator. The EEOC contends that Jaime has a psychiatric disability within the meaning of the ADA based on having been diagnosed with anxiety and bipolar disorder. These conditions, the EEOC maintains, cause Jaime to experience anxiety and episodes of mania, psychosis, and depression.

On September 24, 2018, Jaime returned to the office and told Lewicki that she had been diagnosed with bipolar disorder. Shortly after she returned to the office, an Assistant Manager told Jaime that “people in the office are uncomfortable working with you because of your condition.” On November 11, 2018, Jaime was admitted to the hospital for symptoms related to bipolar disorder. She remained at the hospital until November 19, 2018. On November 12, 2018, Jaime’s husband notified Lewicki that Jaime had been admitted to the hospital. Sometime after Jaime was hospitalized for her disability, a PR employee allegedly heard Lewicki make a comment to the effect that Jaime “is going to the loony bin.”

In a press release issued on September 29, 2021, regarding the case, a regional attorney for the EEOC’s Philadelphia District Office, Debra M. Lawrence, explained that “it is an employer’s responsibility to know their obligations under the ADA.” In commenting on the case, the Director of the EEOC’s Philadelphia District Office, Mindy E. Weinstein, observed that “regardless of an employee’s visible or invisible disability, employers must comply with federal protections for persons with disabilities.”