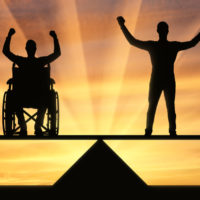 In that case, Gerald Caldwell claimed that he was fired by KHOU-TV and Gannett Company, Inc. (collectively Defendants) on the basis of disability in violation of the ADA. Caldwell began working for KHOU-TV (KHOU) in 1995 as a video editor. As a video editor, Caldwell’s job duties included working in electronic digital recording. Caldwell was disabled when he was hired by KHOU because he had suffered childhood bone cancer. Because of damage to his leg from the cancer, Caldwell walked with the assistance of crutches.

In 2014, Gannet Company, Inc. (Gannet), KHOU’s parent company, ordered a reduction-in-force and required KHOU to eliminate two video editor positions. KHOU then made the decision to fire Caldwell. In explaining the decision to terminate Caldwell, the Defendants initially claimed that Caldwell was fired because he refused to do electronic digital recording work. However, once Caldwell filed his disability discrimination lawsuit, the Defendants explanation for Caldwell’s termination changed. Over time, the Defendants’ explanation shifted from insubordination to resistance to technological changes to lack of initiative.