Are A Sexual Harasser’s Threats Of Physical Harm Part Of A Victim’s Hostile Work Environment? 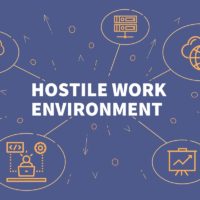 Under Title VII of the Civil Rights Act of 1964 (Title VII), sexual harassment that is sufficiently severe or pervasive to discriminatorily alter the conditions of a victim’s employment and create a hostile working environment is an unlawful employment practice. In Harris v. Forklift Systems, Inc., 510 U.S. 17 (1993), the U.S. Supreme Court held that whether a victim’s work environment is hostile “can only be determined by looking at all the circumstances.” As explained the U.S. Second Circuit Court of Appeals in Raniola v. Bratton, 243 F.3d 610 (2d Cir. 2001), “although sexual harassment is usually thought of in terms of sexual demands, it can include employer action based on sex but having nothing to do with sexuality.” Because a hostile work environment analysis looks to the totality of the circumstances, courts have consistently held that whether a victim worked in a hostile environment is not determined solely by sexual behavior. Rather, non-sexual conduct, including physical threats, sexual epithets, and other abusive behavior, is properly considered in determining whether a victim worked in a hostile environment.

In that case, Sharon Kaytor (Kaytor) brought a sexual harassment claim against her former employer, Electric Boat Corporation (Electric Boat), pursuant to Title VII. Kaytor worked as an administrative assistant to a manager named McCarthy. After working with McCarthy for years without incident, Kaytor alleged that McCarthy began subjecting her to unwanted sexually harassing behavior, including inappropriate comments, sexually suggestive behavior, sexual innuendo, remarks about her buttocks, staring at her body, and leering at her. On one occasion, McCarthy entered Kaytor’s office and complimented her on two scarves that were lying on her desk. He then picked one of them up, “brought them to his nose” and said, “umm, they smell like you.”

Kaytor testified that she believed McCarthy “had designs” on her and that “when things did not go his way, the relationship became sour and he would make off-colored comments to me.” McCarty also allegedly threatened Kaytor with physical harm. On several occasions, according to Kaytor, McCarthy said he wanted to “choke” her. Kaytor further testified that McCarthy often wished her dead, saying “I’d like to see you in your coffin.” When Kaytor told McCarthy that she was going to report his abusive behavior to a company vice-president if it did not stop, McCarthy said, “I’ll kill you.”

Court Looks To Nature Of Workplace Environment As A Whole

At the outset of its opinion, the Second Circuit explained that because the U.S. Supreme Court has ruled that whether a victim’s work environment is hostile can be determined only by looking at all the circumstances, “the crucial inquiry focuses on the nature of the workplace environment as a whole.” Sexual and non-sexual a victim endures, the appellate court pointed out, are included within the totality of the circumstances of the victim’s work environment. Indeed, the appellate court observed, a victim’s hostile work environment “may consist of evidence that the same individual engaged in multiple acts of harassment, some overtly sexual and some not.”

Applying these principles to the facts, the Second Circuit determined that the trial court improperly viewed the evidence in “piecemeal fashion” by carving up Kaytor’s work environment into sexual and non-sexual conduct. McCarthy’s threats to choke and kill Kaytor should not have been excluded from the hostile work environment analysis because a “rational juror could permissibly infer that McCarthy’s harsh treatment of Kaytor was the result of his spurned advances.” The appellate court also determined that a rational juror could find McCarthy’s threats to choke and kill Kaytor were sufficiently severe to alter Kaytor’s working conditions and create an abusive working environment. In other words, the appellate court reasoned, McCarthy’s non-sexual conduct could, standing alone, establish that Kaytor’s hostile work environment harassment claim. Thus, the Second Circuit concluded, when the evidence was “properly viewed within the correct legal framework, Kaytor was entitled to a jury trial on her sexual harassment claim.