Are Employment Decisions Based On Age Stereotypes Unlawful Age Discrimination? 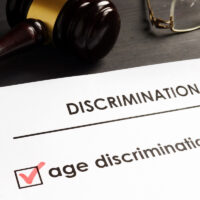 The EEOC brought the age discrimination lawsuit pursuant to the Age Discrimination in Employment Act (ADEA) on behalf of three former employees of White River, Julie Milburn, Donna Boyd (Boyd), and James Kipfer (Kipfer). Under the ADEA, it is an unlawful discriminatory employment practice for employers to discriminate against employees on the basis of age. The ADEA protects employees from age discrimination with respect to all aspects of employment, including hiring, pay, training, demotion, promotion, job duties, discipline, and discharge. As the U.S. Supreme Court observed in Hazen Paper v. Biggins, 507 U.S. 604 (1993), “Congress’ promulgation of the ADEA was prompted by its concern that older workers were being deprived of employment on the basis of inaccurate and stigmatizing stereotypes.” A common inaccurate and stigmatizing stereotype which “is the very essence of age discrimination,” the Biggins Court explained, is “for an older worker to be fired because the employer believes that productivity and competence decline with age.”

Workers Allege Fired Because Of Age

Although White River fired three older workers ostensibly because of an inability to obtain insurance coverage for them when performing driving duties, the EEOC contends that White River made no attempt to locate an alternative insurance policy that would allow for continued driving coverage for its employees.

The EEOC is the administrative agency of the federal government responsible for interpreting and enforcing the federal employment laws prohibiting discrimination, harassment, and retaliation. As part of its statutory mission to deter employers from engaging in unlawful discriminatory employment practices, the EEOC brings lawsuits in federal court on behalf of employment discrimination victims, including employees subjected to unlawful age discrimination.

In a press release issued by the EEOC on July 13, 2021 regarding the case, a regional attorney for the EEOC’s Memphis District Office, Faye A. Williams, explained that the “primary purpose of Congress when passing the ADEA was to promote employment of older persons based on their ability rather than their age.” “An employee’s value,” Ms. Williams observed, “does not disappear simply because he or she has reached a certain age.” In commenting on the case, the Director of the EEOC’s Memphis District Office, Edmond Sims, stated that “this case serves as a reminder that employers may not set arbitrary age limits to displace older workers who are satisfactorily performing their jobs.”