Are Job Applicants Protected From Retaliation When Making A Discrimination Complaint Against A Prospective Employer? 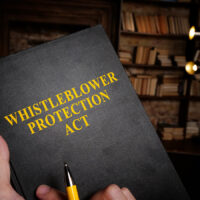 In a press release issued on March 12, 2021, the EEOC announced that it has entered into a Consent Decree to settle a disability discrimination and retaliation lawsuit against Carefree/Scott Fetzer Company, doing business as Carefree of Colorado (Carefree). On September 5, 2019, the EEOC filed the lawsuit, U.S. E.E.O.C v. Carefree/Scott Fetzer Company, Case No. 1:19-cv-02530, in the U.S. District Court for the District of Colorado. In the Consent Decree, which was signed by U.S. District Court Judge Raymond P. Moore on March 11, 2021, Carefree agreed to pay $100,000 to resolve the disability discrimination and retaliation lawsuit.

Carefree manufactures and sells shade products for RV’s, including RV awnings. Biryukova, who is deaf, is an individual with a disability as defined by the ADA. A man named Clark is an independent job developer who contracts with the State of Colorado to provide assistance and employment services for job seekers with hearing impairments. In 2016, Biryukova was Clark’s client.

On August 22, 2016, Biryukova emailed her resume to Carefree and expressed an interest in the positions of assembler, packing, and sewing operations. That same day, a human resources assistant for Carefree, Pravecek, invited Biryukova to come to Carefree’s office to fill out an application and interview. Biryukova forwarded this invitation to Clark. Shortly thereafter, Clark called Pravecek to schedule an interview. Clark told Pravecek that Biryukova would need a sign language interpreter for the interview because Biryukova is hearing impaired. Clark also told Pravecek that an interpreter would be provided at no cost to Carefree. Pravecek told Clark that Biryukova could not work for Carefree because she is deaf. Pravecek then hung up on Clark.

On August 26, 2016, Pravecek sent Biryukova an email telling her there were no job openings. That same day, Clark called Pravecek regarding her email. Clark told Pravecek that Carefree was discriminating against Biryukova because of her hearing impairment. By making this remark, according to the EEOC, Clark opposed disability-related discrimination on behalf of Biryukova. Eventually, Pravecek agreed to have Biryukova come in for an interview.

On August 31, 2016, Biryukova came to Carefree’s office for an interview. Biryukova was accompanied by Clark and a sign language interpreter. Clark requested during the interview that Biryukova be allowed to have a sign language interpreter present for the first ninety days of her potential employment with Carefree for training purposes. By doing so, according to the EEOC, Clark requested an accommodation on Biryukova’s behalf. At the end of the interview, Pravecek said, “we have other applicants to consider.” Carefree did not hire Biryukova for any position at Carefree.

In a press release issued by the EEOC on March 12, 2021 regarding the case, a regional attorney for the EEOC’s Phoenix District Office, Mary Jo O’Neill, explained that “employers are responsible for preventing and remedying discrimination against job applicants, and are prohibited from retaliating against people who oppose such discrimination.” “Preventing discrimination against deaf job applicants is particularly,” Ms. O’Neill added, “because of the underemployment of hearing-impaired individuals.” In commenting on the lawsuit, the Director of the EEOC’s Phoenix District Office, Amy Burkholder, stated that “there are many negative stereotypes against workers with disabilities and unjustified assumptions that they may not able to perform in the workplace.” “The ADA was passed,” Ms. Burkholder observed, “to address those stereotypes.”

Based in Ocala, Florida and representing employees throughout Central Florida, our Marion County, Florida attorneys for retaliation victims have fought for the rights of employees victimized by retaliation for more than two decades. If you have been retaliated against for complaining about discriminatory employment practices or have questions about rights as a victim of workplace retaliation, please contact our office for a free consultation with our Ocala, Florida lawyers for retaliation victims. Our employment and labor law attorneys take retaliation cases on a contingency fee basis. This means that there are no attorney’s fees incurred unless there is a recovery and our attorney’s fees come solely from the monetary award that you recover.