Are Male Employees Protected From Sexual Harassment From Female Co-Workers? 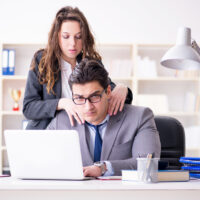 In that case, Michael Gregg (Gregg) brought a sexual harassment claim against his employer, the City of Houston, Texas (the City), pursuant to Title VII of the Civil Rights Act of 1964 (Title VII). Title VII makes sex discrimination an unlawful discriminatory employment practice. Sexual harassment is a form of sex discrimination made forbidden by Title VII. Gregg alleges that the City violated Title VII by creating and maintaining a sexually hostile work environment.

Since 2008, Gregg has been employed by the Houston Police Department (HDP). In 2012, Gregg transferred to the Child Sexual Assault Unit (CSAU) to work as an investigator. In August 2014, a woman named McCormick joined the CSAU as an investigator. Gregg’s hostile work environment harassment claim is based on allegations that beginning in August 2014, his female co-worker, McCormick, subjected him to unwanted sexually harassing behavior. Gregg alleges that McCormick’s sexually harassing behavior towards him, which purportedly occurred almost every day, included leering at his crotch, making sexual remarks and sexual innuendos, rubbing his shoulders and neck area while he sat at his desk, simulating the performance of oral sex, and taking a picture zoomed in on his crotch with her cell phone.

Gregg contends that McCormick’s sexual behavior in the workplace was well-known by co-workers and his immediate supervisor, Perales, who was also McCormick’s supervisor. Gregg claims that Perales “openly acknowledged” to Gregg that she knew about McCormick’s misconduct. Despite her alleged knowledge of McCormick’s sexual behavior in the workplace, according to Gregg, Perales “did not take any steps that stopped the harassment.” After Perales was transferred to another HPD division in September 2015, Gregg contends that his subsequent supervisors were also “well aware of McCormick’s behavior.”

The City filed a motion with the trial court seeking dismissal of Gregg’s sexual harassment claim. In doing so, the City argued that McCormick’s alleged conduct was not sufficiently severe or pervasive to alter the conditions of Gregg’s employment and create an abusive working environment. The trial court denied the City’s motion for dismissal and ruled that Gregg had presented sufficient evidence to establish that he worked in a sexually hostile work environment to proceed to a jury trial.

In denying the City’s motion for dismissal, the trial court found that McCormick’s alleged sexual behavior towards Gregg was sufficiently pervasive to create a hostile work environment. In support of its conclusion, the trial court pointed out that Gregg testified that McCormick’s sexually charged conduct occurred on “almost a daily basis.” The trial court also observed that McCormick’s “unwelcome harassment was not confined to inappropriate comments, it also included inappropriate touching and embarrassing [Gregg] in front his peers such as when she held up a photo of [Gregg’s] crotch[.]” Based on this evidence, the trial court determined, a reasonable jury could find that “the two years of sexually explicit comments and unwanted touching [Gregg] endured constitutes harassment” that was sufficiently pervasive to alter the conditions of Gregg’s employment and create a hostile working environment.