Are Mexican-American Employees Protected From Harassment Because Of Their Mexican Heritage? 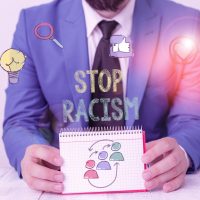 For more than twenty years, our Citrus County, Florida workplace harassment attorneys have fought for the rights of employees who have been required to work in a hostile environment. Through their decades of experience representing hostile work environment harassment victims, our Inverness, Florida workplace harassment lawyers know that Mexican-American employees are frequently targeted for discriminatory harassment. In far too many cases, Mexican-American employees are required to endure racist comments, remarks invoking negative stereotypes of persons of Mexican origin, and less favorable treatment. In this article, our Citrus County, Florida workplace harassment attorneys explain how the decision in Morales v. Northshore University Healthsystem, (E.D. Ill. Feb. 2, 2022) demonstrates that federal employment discrimination law provides Mexican-American employees with a remedy when they are targeted for discriminatory harassment in the workplace.

Title VII of the Civil Rights Act of 1964 (Title VII) prohibits employers from discriminating against employees on the basis of national origin. In Espinoza v. Farah Manufacturing 414 U.S. 86 (1973), the U.S. Supreme Court defined a national origin as the “country where a person was born, or, more broadly, the country from which his or her ancestors came.” Under the Supreme Court’s definition of a national origin, employers are prohibited from discriminating against employees based on where they were born or from where their ancestors came.

In Morales, a woman named Morales brought an employment discrimination lawsuit against her former employer, Northshore University Healthsystem (Northshore), pursuant to Title VII. Morales claims that she was harassment because of her Mexican origin in violation of Title VII. Northshore operates a healthcare delivery system comprising six hospitals in Chicago, Illinois. Morales, who is of Mexican descent, was employed by Northshore as a patient support associate. Morales contends that, throughout her employment with Northshore, she was subjected to discriminatory harassment by co-workers because of her Mexican heritage. For example, Morales claims that her co-workers called her an idiot, told her that only Latinas and Mexicans did the dirty work, called her the department slave, and suggested that she had an escape tunnel in the basement like the drug lord El Chapo. One co-worker, according to Morales, repeatedly harassed her to “hurry up her work” and told her that “if she was Mexican, she could work a little harder when she needed to get things done quickly.” Morales further claims that she was subjected to remarks invoking negative stereotypes of persons of Mexican origin. For example, Morales alleges that co-workers remarked that she drove her father’s pickup truck to work because she was there to pick up scrap metal and they made comments comparing her to cleaning and kitchen staff. In addition to these comments, Morales contends that she was given a workload heavier than those of white and non-Mexican employees.

Northshore filed a motion with the trial court seeking dismissal of Morales’ hostile work environment harassment claim. In doing so, Northshore argued that the alleged harassment Morales endured was not sufficiently severe or pervasive to create a hostile working environment in violation of Title VII. The trial court disagreed and ruled that a reasonable jury could find that was unlawfully harassed because of her Mexican heritage in violation of Title VII.

In support of its conclusion that Morales was entitled to proceed to a jury trial, the trial court explained that Morales “testified to dozens of abusive, inappropriate, and racially incentive comments and actions directed at her by her co-workers during her employment with Northshore.” “A reasonable jury could find,” the trial court reasoned, that “this conduct—which, according to Morales, included referring to her as . . . the department slave, invoking stereotypes of persons of Mexican origin, and suggesting that as a Mexican-American she was likely conducing menial labor—would be offensive to a reasonable person in a way that altered the conditions of her employment.”

Based in Ocala, Florida and representing workers throughout Florida, our workplace harassment attorneys in Citrus County, Florida have dedicated their practice to representing employment discrimination victims. If you have been discriminated against at work or have questions about your employee rights under federal employment discrimination law, please contact our office for a free consultation with our workplace harassment lawyers in Citrus County, Florida. Our employee rights law firm takes workplace harassment cases on a contingency fee basis. This means that there are no attorney’s fees incurred unless there is a recovery and our attorney’s fees come solely from the monetary award that you recover.