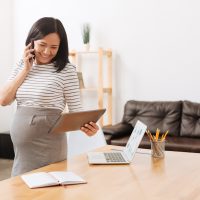 Hillside is a car dealership. Stidhum was employed by Hillside as a salesperson. In this position, Stidhum was supervised by a man named Thanwalla. In December 2018, Thanwalla went on vacation and a man named Guzman was put in charge of the Finance Department in his absence. This period coincided almost exactly with when Stidhum informed her co-workers that she was pregnant. Stidhum had learned that she was pregnant on November 23, 2018, and she informed her co-workers, including Thanwalla and Guzman, on December 1, 2018. Stidhum alleges that she received her salary, bonus, and commission before Guzman took control of the Finance Department in Thanwalla’s absence. However, she alleges that once Guzman took control, her bonus decreased, and she was denied her commission.

Prior to December 2018, Stidhum describes her work performance as “exemplary,” alleging that she sold between 25 and 31 cars per month. Stidhum claims that after she announced her pregnancy, Guzman started making her customers wait anywhere between forty and sixty minutes and that her customers walked out of the dealership as a result of the longer wait times. Stidhum further claims that due to Guzman’s actions, she sold only eight to ten cars between the day that she informed her co-workers that she was pregnant and her last day of employment. Stidhum contends that she called Guzman “constantly” to inquire about the customer wait times during this period. He reportedly told her that all salespersons had to wait this long, but Stidhum alleges that the wait time for other salespersons remained at approximately twenty minutes (compared to her forty to sixty minutes).

As a result of Stidhum’s drop in sales, her bonus was reduced, and she was denied her commission. When Thanwalla returned from vacation on January 10, 2019, Stidhum informed him of Guzman’s “sabotage.” Thanwalla allegedly told Stidhum that he would give her a bonus of two-hundred dollars. However, he failed to provide Stidhum with any bonus, discipline Guzman, or restore Stidhum’s usual wait times. On January 14, 2019, Stidhum resigned.