Are Women Protected From Pregnancy Discrimination When They Return From Maternity Leave? 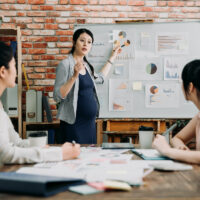 In that case, Katie Gerdin (Gerdin) brought an employment discrimination lawsuit against her former employer, CEVA Freight, LLC (CEVA), pursuant to the Pregnancy Discrimination Act (PDA). The PDA prohibits employers from discriminating against job applicants and employees on the basis of pregnancy, childbirth, or related medical conditions. Gerdin claims that CEVA violated the PDA by terminating her employment because of her pregnancy.

In September 2008, Gerdin was hired by CEVA as an administrative assistant. In the summer of 2009, Gerdin informed CEVA that she was pregnant. In October 2009, Gerdin began training another employee named Rodriguez to perform her duties so that Rodriguez could perform those duties while Gerdin was on maternity leave. On March 15, 2010, Gerdin took maternity leave pursuant to the Family Medical Leave Act (FMLA). On May 24, 2010, Gerdin returned to work from maternity leave. Upon her return, Gerdin’s job title remained the same, but she contends that her job duties changed, and the only job duty returned to her was performing telephone invoicing. On June 9, 2010, less than three weeks after she returned from maternity leave, CEVA fired Gerdin. When terminating her employment, CEVA told Gerdin that her position had been eliminated as part of a reduction-in-force.

Fired After Returning From Maternity Leave

During the litigation, Gerdin testified that she was subjected to derogatory pregnancy-related remarks by her supervisor, a man named Livingston, both before and after her maternity leave. Gerdin testified that prior to her maternity leave, Livingston expressed displeasure with her having to take time off work to go to her parental doctor appointments, and questioned her as to how long her appointments would take, and whether they could be made at different times. Gerdin further testified that when she returned from maternity leave, Livingston said to her: “I hope that having kids is not going to interfere with your ability to work full-time,” and suggested to her that a part-time job might be better for her.

In further support of its motion for dismissal, CEVA argued that the evidence established that Gerdin was fired because her position was eliminated as part of a reduction-in-force and not because of her pregnancy. In rejecting this argument and denying CEVA’s motion for dismissal, the trial court found that Gerdin had presented sufficient evidence to establish that CEVA’s proffered reason for her termination was a pretext for pregnancy discrimination. This evidence, the trial court determined, included the fact that Gerdin was fired three weeks after she returned from maternity leave, her duties as an administrative assistant were assumed by Rodriguez while she was on maternity leave and after her maternity leave, and the negative comments by her supervisor Livingston both before and after her maternity leave. From this evidence, the trial court concluded, a reasonable jury could find that Gerdin was fired because of her pregnancy in violation of the PDA.