Can A Female Employee Be Sexually Harassed By A Heterosexual Woman? 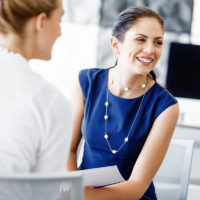 Watkins claimed that she was sexually harassed by Sosnowski while employed by Illinois Central. Watkins alleged that Sosnowski’s sexual behavior towards her involved sexual advances, such as Sosnowski grabbing her crotch and asking Watkins if she wanted to play with Sosnowski’s genitalia, asking Watkins if she opposed “being with a woman,” and remarking about wanting a woman to impregnate her. Watkins further alleged that Sosnowski’s sexual behavior towards her involved physical touching, such as touching her nipple, grabbing her breasts, rubbing up against her breasts, and laying her breasts on Watkins’ back. Sosnowski also allegedly made comments about Watkins’ breasts and nipples and, on one occasion, asked Watkins if she wanted to see her breasts.

Based on the uninvited sexual solicitations and unwanted touching of a sexual nature, Watkins believed that Sosnowski “wanted to have sexual relations” with her. Two co-workers thought that Sosnowski was gay or at least curious about having a sexual relationship with another woman. However, Sosnowski submitted an affidavit in which she testified that she is a heterosexual who has been married and has two children.

In denying Illinois Central’s motion for dismissal, the trial court found that, regardless of Sosnowski’s assertion that she is heterosexual, there was substantial evidence demonstrating that Sosnowski’s conduct towards Watkins was “borne of sexual attraction” and a desire for a sexual relationship with Watkins. In support of its conclusion, the trial court pointed to evidence that Sosnowski touched Watkins’ breasts and nipple, wanted to show Watkins her breasts, told Watkins that she wanted a woman to impregnate her, and raised the prospect of being with a woman with Watkins. Although none of this evidence “proves that Sosnowski is gay,” the trial court pointed out, “the connotations of sexual interest in [Watkins] suggest that Sosnowski might be sexually oriented toward members of the same sex.” The trial court also noted that Watkins’ co-workers interpreted Sosnowski’s conduct towards Watkins “to mean that Sosnowski wanted a sexual relationship with [Watkins].” Based on this evidence, the trial court reasoned, “Sosnowski’s affidavit that she considers herself to be heterosexual does not preclude a jury from finding that she was sexually attracted to [Watkins].”